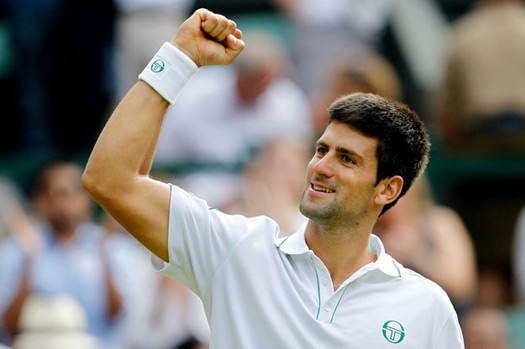 World number three Novak Djokovic advanced into the fourth round at The Championships with a 6-1, 6-4, 6-4 win over no.28 seed Spaniard Albert Montanes in 1 hour and 41 minutes.

Djokovic opened the match with a comfortable hold to fifteen. Novak’s power from the baseline was impressive. His pressure brought result in game four. He earned two break points, missed the first, but won a phenomenal point at second attempt, retrieving an impossible situation, recovering the point when Montanes was in total control. Two forehand winners took him to break point in the sixth game. Montanes failed to read Nole’s backhand which gave the Serb a double break. The third seed wrapped up the opening set 6-1 in just 26 minutes.

With the wind in his sails he broke his opponent’s serve in the opening game of the second set and then held to extend his lead. Novak kept the advantage till the end of the set and won it 6-4.

Novak made a break in the first game of the third set and it was enough for the 23-year-old Serb. He found himself serving for the match at 5-4, sealing the win when Montanes went long.

Djokovic is growing in confidence. “It’s building up. I’m happy about that. It’s important prior to the second week of the Grand Slam, which obviously gets more difficult. I’m going to have, of course, a better-ranked opponent, which is going to be a very tough one. So two days are going to help me to work on my game a little bit and get physically and mentally fit for the upcoming challenge,” said Novak after the match.

Djokovic fired 11 aces to Montanes’s 5.
He hit 37 winners compared to the Spaniard’s 26 , and made 14 unforced errors , 6 less than his opponent.
The Serb won a total of 96 points to the Spaniard’s 72.
Djokovic capitalised on 4 of his 9 chances for break, while Montanes didn’t earn a single break point on Novak’s serve.