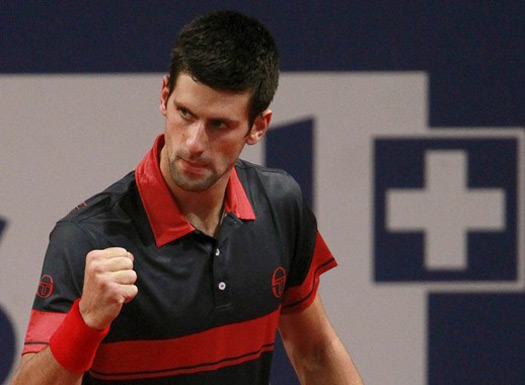 World no.3 Novak Djokovic continued his quest for 19th ATP World Tour title. The best Serbian tennis player earned a 6-4, 7-6(6) win over world no.41 qualifier Jarkko Nieminen of Finland in 1 hour and 58 minutes to advance to quarter-finals of Swiss Indoors Basel.

This was their fourth match, Nole now leads 3-1.

Novak saved four break points in the seventh game of the first set. The best Serbian tennis player earned himself three opportunities to break in the tenth game and converted the first for 6-4 in 48 minutes.

There were no breaks in the second set, so it was decided in a tie-breaker. Nole was leading 4-2, but the Finn won four points in a row to earn two set points. Djokovic saved the first with a fantastic forehand return and the second with a strong serve that Nieminen could only return long. The 23-year-old from Belgrade wrapped up the match at the first attempt.

“I was aware of his qualities,” said Novak after the match. “Before we got to the court I knew that we were going to have long rallies, I was going to work for my points, and that’s what happened. But when I needed to I served well, and it was a little bit lucky in the second set to finish with the win.”

Djokovic hit 7 aces to Nieminen’s 2.
The Serb capitalised on 1 of his 2 break points, while the Finn failed to convert any of his 4 break point opportunities.
Novak won 8 points more than Nieminen, 85/77.

Novak won their only previous encounter at US Open 2007.