Djokovic falls to Haas in the finals! 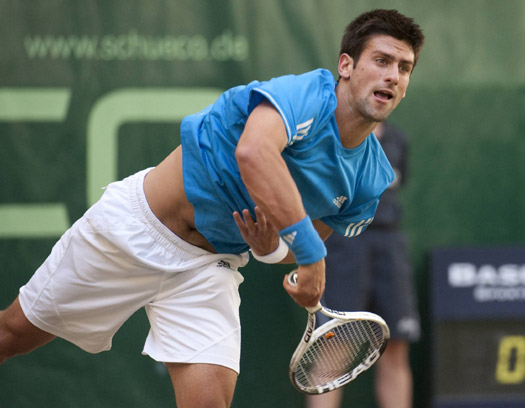 The best Serbian tennis player Novak Djokovic failed to win his fourteenth career title and his first trophy on grass.

Fantastic German Tommy Haas was better than Novak in the finals of the tournament in Halle. Former world no.2 won in three sets 6-3 6-7(4) 6-1 in 2 hours and 12 minutes.

World no.41 had a slight but constant dominance during the whole match. Haas capitalised on three of his ten chances for break, while Novak didn’t convert any of his four break points.

The only break Haas made in the first set was in the eighth game and then he served it out for 6-3.

There were no breaks in the second set, but Novak managed to win it in tiebreak (7-4) after the German made three double faults.

The final set score was 6-1 for Haas. The home player made a break after Novak made two double faults in the second game. Novak had four chances to break (three in a row) in the next game, but Haas held with fantastic services, and increased his lead to 3-0. Novak didn’t have strength to turn the match in his favour. He was broken once again and the German won an ATP title after two years.

‘Tommy was better in the finals, and he deserved to win. I have not played my best tennis, and I was really lucky to win the second set tiebreak.. Haas used all his chances, unlike me. I wasn’t playing well’- said Novak after the defeat.

Anyway, Novak had a very good preparation for Wimbledon in the five matches he played in Halle. The Championships will be played in London suburb from June 22nd until July 5th.

Last year Djokovic was eliminated in the second round of Wimbledon when he lost to Russian Marat Safin.