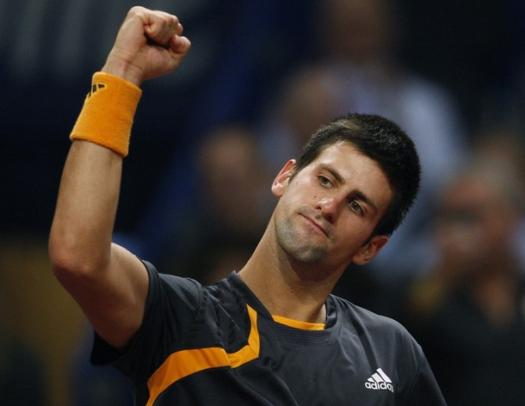 World number three Novak Djokovic reached his 14th ATP World Tour semifinal of the year with a 3-6, 7-6(5), 6-2 victory over Swiss Stanislas Wawrinka at the Davidoff Swiss Indoors Basel on Friday. The match lasted 2 hours and 18 minutes.

Djokovic had two break points in the opening game of the match but Wawrinka held. The Swiss was more aggressive and full of confidence. He broke Novak’s service in the eighth game for 5-3 lead. Nole earned two chances for break in the ninth game, but no.6 seed saved them with two aces, and took the set 6-3.

The 22-year old Serb failed to capitalise on his chance for break in the sixth game of the second set, and already in the next he faced scare. He saved three break points, but Wawrinka converted the fourth to go up 4-3. Djokovic managed to break back immediately to level the score. The set went to a tie-breaker, Novak made two mini breaks, one more than his opponent, and won it 7-5.

No.2 seed got a confidence boost and got his rhythm. Wawrinka’s unforced error number increased as the third set progressed, and Djokovic took full advantage. He made two breaks, in the first and third game, and closed the set and match 6-2.

“Most of the match he was controlling the game. I didn’t feel quite fresh at the start and for a set and a half I was moving quite badly. He played really well and one of the key elements in his game, which was working pretty well, was his serve. I had a lot of difficulty getting a lot of returns back. But I managed to hold my nerve in important moments and smoothly win the third set.”

”He was a set and a break up, everything was going his way, he was the better player on the court. But this is tennis, this is sport, things can change in a split of a second if you’re not focused enough. I gained the momentum, gained confidence. His level dropped, I felt that. He didn’t move well, wasn’t aggressive enough. He made a lot of unforced errors, and I just kept the momentum going.”

Novak will play against no.5 seed Radek Stepanek for a place in the finals. The Czech defeated fourth-seeded Croat Marin Cilic in three sets 4-6, 6-3, 6-3.