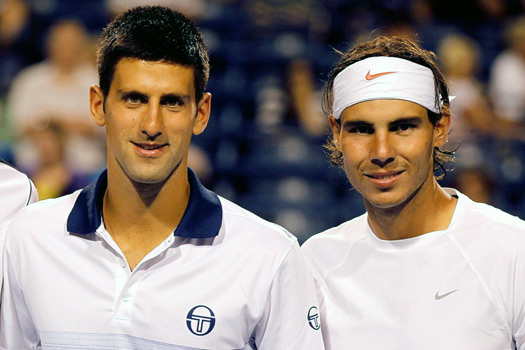 10. 08. 2010. · In their first doubles match together the no.2 and 1 singles players in the ATP Rankings Novak Djokovic and Rafael Nadal were upset by Canadian wild cards Vasek Pospisil and Milos Raonic 7-5, 3-6, 8-10 in 94 minutes at the Rogers Cup.

They teamed up for the first time, and it’s the first time the top two singles players are joining forces since 1976 when no.1 Jimmy Connors and no.2 Arthur Ashe teamed up at the Volvo International in North Conway.

Djokovic and Nadal had chances for break in the third and seventh games of the opening set, but the Canadians held and made a break in the eighth game for 5-3. They were serving for the set when the Serbian-Spanish duo fought back saving two set points and breaking their opponents’ serve twice, in the ninth and eleventh games to win four games in a row and clinch the first set 7-5 in 44 minutes.

Nole and Rafa failed to capitalise on two break points in the fifth game of the second set and faced scare in the eighth game. Pospisil and Raonic used their chances, made a break and then closed the set 6-3.

The Canadians were more focused in super tie-breaker. They had a 5-0 and 8-2 lead, and four match points at 9-5. The Serbian-Spanish pair saved three of those opportunities and came close to 9-8, but Pospisil and Raonic managed to win it 10-8.

Djokovic and Nadal won 67 per cent of service points, converted two of 8 break point opportunities and had more total points won, 72/66, but it wasn’t enough for their first win at the ATP World Tour Masters 1000 hard-court tennis tournament in Toronto.