Djokovic rolls into third round of Shanghai 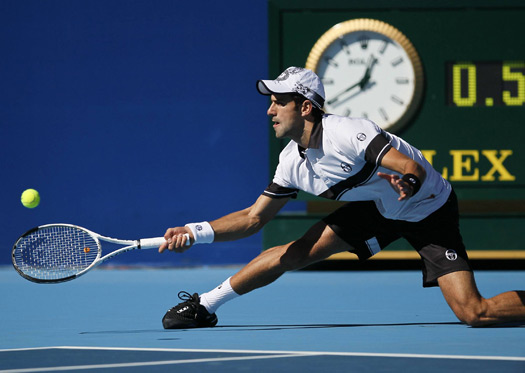 The best Serbian tennis player Novak Djokovic continued his good run of form with a 6-3, 6-3 win over world no.17 Croat Ivan Ljubicic in the second round of the Shanghai Rolex Masters.

It was Novak’s 50th win of the season. The match lasted 1 hour and 20 minutes. Second-seeded Djokovic converted 3 of his 10 chances for break, while Ljubicic failed to capitalise on any of his 6 opportunities.

Nole continued the second set in the same rhythm. He made a break already in the first game without losing a point. He broke his opponent’s serve once again in the ninth game to clinch the set and match 6-3.

“I definitely am satisfied with the performance, satisfied with my game, physical state and my condition,” said Djokovic after the match. “I’m playing well, moving well, motivated mentally, and full of energy. I’m hoping that it’s going to stay that way.”


Last game of the match

The Serb, who captured Tennis Masters Cup in Shanghai in 2008, will next face world no.31 Richard Gasquet. The Frenchman beat his compatriot no.15 seed Gael Monfils in three sets 6-4, 3-6, 6-4.

The third round match is scheduled on Thursday.
Djokovic and Gasquet have met three times, Nole leads 2-1.

Novak will pair Jonathan Erlich of Israel against French combination Jo-Wilfried Tsonga/Michael Llodra in the doubles first round on Thursday.

“The Barclays ATP World Tour Finals in London is the most important event for me next to the Davis Cup final which is very special at this stage because you’re not playing in the Davis Cup final every year,” said Nole about the upcoming challenges at the press conference yesterday. “My country is really living for that weekend. That’s one of my priorities, to try to win the title there.”