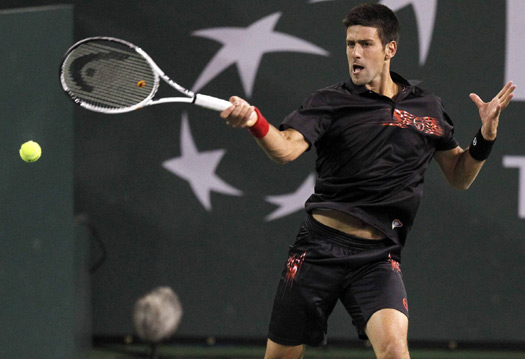 World no.2 and 2008 champion Novak Djokovic saved three match points before beating no.25 seed German Philipp Kohlschreiber 6-3, 2-6, 7-6(3) in 2 hours and 35 minutes on Monday to reach the fourth round at the ATP World Tour Masters 1000 tournament in Indian Wells.

Djokovic got the clash underway by serving first. It was a tough opening service game for Novak but he eventually held saving a break point. He used his chance in the second game and broke Kohlschreiber ‘s service. The Serb eased through a service hold with a good first serve for 3-0 lead. He took the first set 6-3 in 42 minutes.

Nole started the second set very well, breaking his opponent’s service in the opening game and holding for 2-0, but he lost his focus from that moment and let the German take control. Kohlschreiber made three breaks in a row and clinched the set 6-2.

No.25 seed held to love with consecutive aces to open up the third set with ease. Djokovic continued making unforced errors and got broken once again. He lost ninth game in a row when Kohlschreiber sealed another service hold and cemented his early break to go 3-0 up. Nole saved two break points in the fourth game and that was probably the crucial moment in today’s match. The best Serbian tennis player found his rhythm again. He broke Kohlschreiber twice, in the fifth and seventh game to go up 4-3. The German fought back to equalise the result. Djokovic faced three break/match points in the tenth game, but managed to save all three to level up.

The set went into a tiebreaker. Novak made three mini-breaks, two more than his opponent and won it 7-3.

”It’s a fact that I’m not feeling the ball 100 percent”, said Novak. “It’s a sport. You cannot always play your best. Still, considering the last couple of weeks that I had, it’s normal that I dropped the level of game a little bit.”

The 22-year-old Djokovic will next face no.20 seed Ivan Ljubicic of Croatia who ousted Argentine qualifier Brian Dabul in straight sets 6-2, 6-3.