Djokovic through to round three in singles and doubles 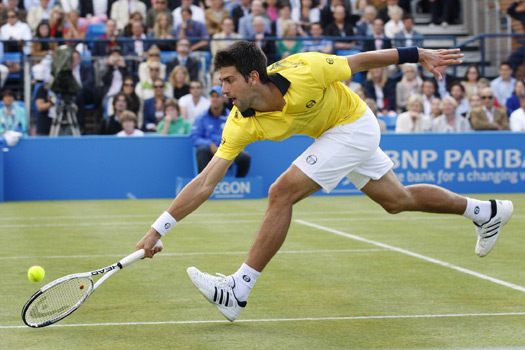 Novak made a break in the fourth game of the first set and then held to extend his lead to 4-1. The 23-year-old Belgrade native took the set 6-3.

The Serb broke his opponent’s serve twice in the second set for 6-3 and first victory of the season on grass court in singles competition.

Djokovic saved all six break points he faced and converted three of his six chances for break.

Nole will next face world no.74 Xavier Malisse. The Belgian beat Australian wild card Bernard Tomic 6-2, 3-6, 6-2. The two players have never met before.

Novak Djokovic and Israel’s Jonathan Erlich advanced into the third round of doubles. They upset seventh-seeded Brazilians Marcelo Melo and Bruno Soares 7-6(3), 4-6, 10-3 in 1 hour and 31 minutes.

Each team made two breaks of serve in the first set. It went into a tie-breaker, Djokovic and Erlich won it 7-3.

A break in the fifth game was enough for the Brazilians to take the second set 6-4.

The match was decided in a super tie-breaker. The Serbian-Israeli combination was convincing, 10-3, to set up a quarter-final clash with no.2 seeds Wesley Moodie (RSA) and Dick Norman (BEL).