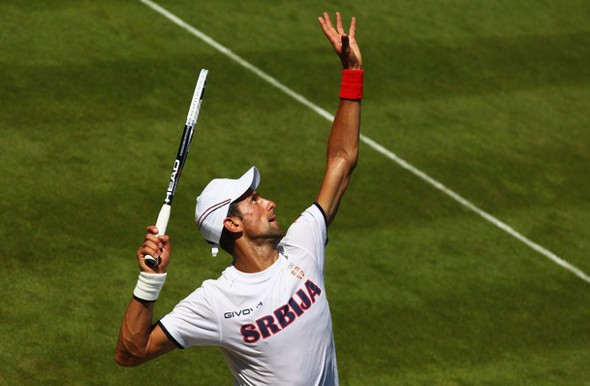 The draws for the London 2012 Olympic tennis tournament (July 28 – August 5) have been made.

Nole, who won bronze in the 2008 Games in Beijing, is the no.2 seed, and will open his campaign in singles competition against world no.65, Fabio Fognini from Italy, on Sunday at 13.00 CET.

“I have nothing to worry about or be disappointed about. I have recovered from Wimbledon and I’m very excited to be part of these Games. I’m happy that we have the Olympic Games on the grass courts. I really like these courts. I think all of us who are taking part in the Olympics are very excited about it”, Novak said.

In the doubles event, no.8 seeds Novak Djokovic and Viktor Troicki will take on Lindstedt and Brunstrom from Sweden on Sunday about 18.30 CET.

This year, the prestigious Olympic tennis event will be held at the All England Lawn Tennis Club in Wimbledon. The grounds will look different from the Championships and players will not be required to wear all-white attire. All matches will be the best of three sets except for the men’s singles final which will be the best of five sets. Players reaching the semi-final are assured of an opportunity to compete for a medal, as the two losers in the semi-finals contest a bronze medal match.

Teams will enter in alphabetical order, according to the language of the host country, apart from the Greek team, which enters first for the Olympics, and the team of the host nation, Great Britain, who will be marching in last.

Novak will be Serbia’s flag bearer. 115 Serbian athletes have secured a spot at the Olympic Games in 15 sports.