Exhibition in Seoul, then title defence in Beijing 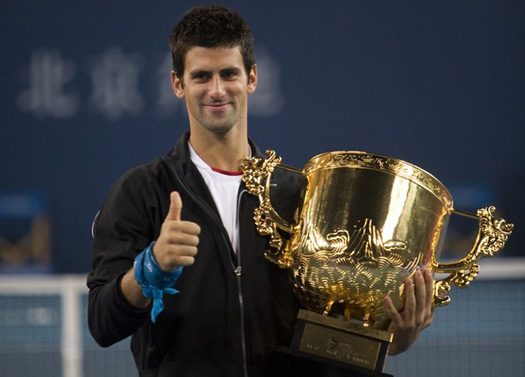 On Monday, October 4, Nole starts a series of tournaments in Asia. He faces a serious task at the very beginning as he’s a defending China Open champion. He won 500 ATP points 12 months ago in Beijing.

En route to the trophy in 2009. on his debut in the capital of China, Novak beat Victor Hanescu, Viktor Troicki, Fernando Verdasco, Robin Soderling and Marin Cilic, respectively.

Besides this title, Nole has beautiful memories of Beijing 2008 when he brought the Olympic bronze medal to his country defeating American James Blake.

If we take everything into account, the world number two won ten out of eleven matches he played in this city.

Two days before the beginning of the China Open, i.e. on October 2, Novak Djokovic will take part in an exhibition “Hyundai Card supermatch” in Seoul (South Korea). The best Serbian tennis player will play against American Andy Roddick at the event which was organised on three occasions, in 2005 (Sharapova – V. Williams), 2006 (Federer – Nadal) and 2007 (Federer – Sampras).

“I’ve heard that the “Hyundai Card supermatch” is one of the greatest sporting events in Korea. This will be my first visit to Korea and I’m really looking forward to meeting my fans there, a new country and its culture,” said Nole.

Meanwhile, there is no longer any doubt about what surface the Davis Cup final tie in Belgrade between Serbia and France will be played on. The Serbian tennis federation (TSS) chose hard court surface.

“We’ve decided to host France on a Rukort Medium fast hard surface,” the TSS said in a statement.