Fantastic Nole easily through to quarter-finals of Australian Open! 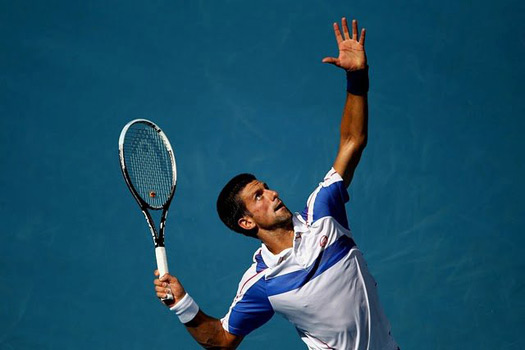 Australian Open 2008 champion Novak Djokovic has overpowered Spain’s Nicolas Almagro in straight sets 6-3, 6-4, 6-0 in 1 hour and 44 minutes to progress to his fourth successive quarter-finals in Melbourne.

Djokovic opened their second career clash with a hold . He grabbed his first break of the match in the fourth game and then consolidated the break to increase his lead to 4-1. The Serb took the set 6-3 in 31 minutes.

A break in the third game was enough for the world no.3 to win the second set 6-4.

Nole showed no mercy in the third set. The 23-year-old broke his opponent’s service three times and wrapped up the set and match in very convincing fashion 6-0.

“It was a very good match. Serve was great today, and it’s important to raise a level of performance as I did today, you know, before the quarterfinals”, said Novak in his postmatch interview.

“Now the opponents are very difficult and matches are tough and unpredictable. It was a great match for me today. I had a tough opponent, big hitter, and I could test couple things in my game. It was important for me to spend as less time on the court as I could, and that’s what I did. I’m hitting the ball well. Physically and mentally I’m fit and ready to win another match. So I’m taking one match at a time, and seriously, analyzing my next opponent.”

Nole converted 5 of his 13 break points, while the Spainiard didn’t use any of his 3 break point chances.

Shot of the day:

Djokovic will next play against sixth-seeded Tomas Berdych. The Czech beat no.9 seed Spaniard Fernando Verdasco 6-4, 6-2, 6-3.