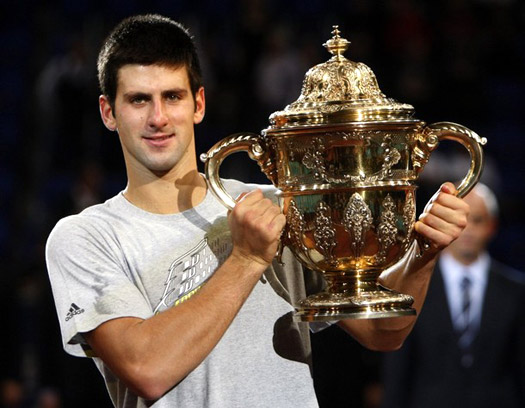 Novak won his fifteenth career title and fourth of the season, and improved his ATP World Tour leading record to 71-18. He will get 500 ATP points and €291,700.

Djokovic broke Federer’s service in the ninth game of the first set. The 22-year-old lost only two points on his own serve til that moment, both making double faults. But the tenth game brought a lot of excitement. Both players were very nervous, they made many unforced errors. Novak missed six set points, Roger failed to capitalise on his five break point chances. The Serb held after great fight and used his seventh set point to take the set 6-4.

Nole made a break in the opening game of the second set and then held for 2-0 lead. Federer broke back in the fourth game to level the score. At 4-5 Djokovic was serving to stay in the set, but couldn’t hold the pressure and got broken for the second time to lose it 4-6.

World no.3 stayed focused, not thinking about the last game of the second set. He continued playing aggressive, hitting powerful accurate shots and it paid off. Novak broke Federer’s service twice and was soon 4-0 up. He was struggling on his serve in the sixth game, but saved all three break points and held for 5-1 lead. No.2 seed used his first match point to win the set and match 6-2.


Roger holds a 9-5 advantage against Nole.

Djokovic is heading to Paris tomorrow. He will play at the BNP Paribas Masters, the ninth and the last ATP World Tour Masters 1000 tournament of the year (€2,750,000 prize money).

Novak is no.3 seed. He will start his bid for his fifth Masters title in the second round against the winner of the match between Frenchman Jeremy Chardy and Argentine Juan Monaco.