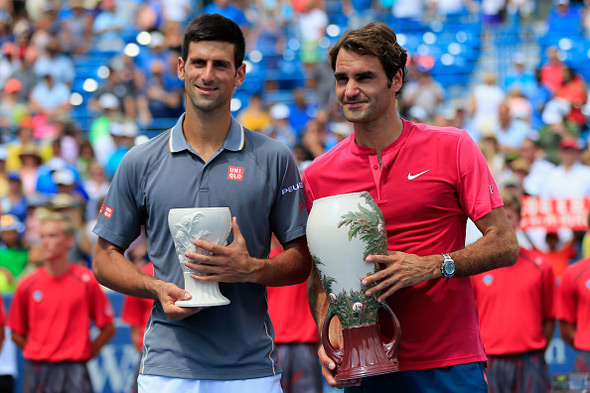 World no.1 Novak Djokovic lost to second seed and seven-time champion Roger Federer in the final of the Western & Southern Open on Sunday, falling short of Career Golden Masters. He also finished runner-up in 2008-09, ’11-12.

Federer recorded a 7-6 (1), 6-3 victory at the Lindner Family Tennis Center in 90 minutes. It was the 41st career encounter between the two, Roger now leads their H2H series 21-20.

Novak fought off four break points in the first set which proceeded to a tie-break. Federer won it in convincing fashion 7-1.

The Swiss continued applying pressure on Novak’s serve as the match progressed, surging to a 3-0 lead in the second set. He kept the advantage till the end and closed it out to claim 87th title and 24th ATP Masters crown (tied with Novak; Nadal is on top with 27).

“The fifth time I’ve been in the title match and never won this title, so I guess I have to wait for Roger to retire,” Djokovic said (laughing). “I’ve been coming back each year wanting it more. I’m going to keep fighting to make history. Obviously it’s a great incentive and inspired me to come back and play my best tennis.”

The final Grand Slam tournament of the season will take place at the USTA Billie Jean King National Tennis Center from August 31 to September 13.