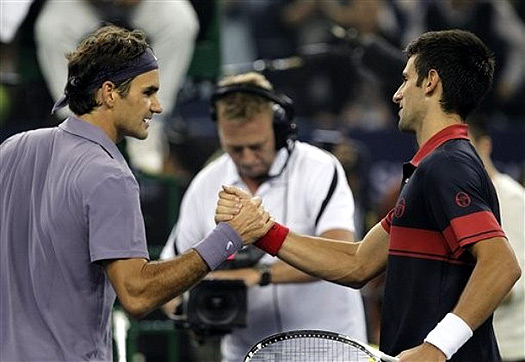 Second seed Novak Djokovic failed in attempt to reach his fourth ATP World Tour final of the season on Saturday. No.3 seed Roger Federer won 7-5, 6-4 in 1 hour and 42 minutes at the Shanghai Rolex Masters.

By reaching the semi-finals in Shanghai Nole repeated last year’s result and defended his points, but he will drop to no.3 in the ATP Rankings on Monday since Federer didn’t play at the event last year.

Novak had four break points in the first set. Federer saved all four and converted his second break point opportunity in the eleventh game to go 6-5 up. He took the set 7-5.

Nole couldn’t find his rhythm and was broken in the opening game of the second set. The Swiss broke Djokovic’s serve for the second time in the fifth game for 4-1 lead. Novak broke back once and held for 3-4, but couldn’t do more. Federer served out the match 6-4 to advance into the finals where he’ll face Andy Murray.

“It was a very intensive first set and I didn’t use the chances that I had,” said Djokovic after the match. “When he got his second break point, he used it and finished off the set 7-5. The start of the second set, I lost my focus a little bit, my energy dropped. In the blink of an eye, I was two breaks down. So it was very hard to get back from that situation. I’m just disappointed a little bit because I think I’ve played quite well in the first set. He played some great shots when he needed to. So he deserved to win.”

Nole will next play at the Swiss Indoors Basel in Switzerland, where he won the trophy last year when he defeated three-time defending champion Roger Federer 6-4, 4-6, 6-2.

The event is celebrating its 40th jubilee with an impressive line-up, including four men from the world’s top ten: Novak Djokovic, Roger Federer, Tomas Berdych and Andy Roddick.