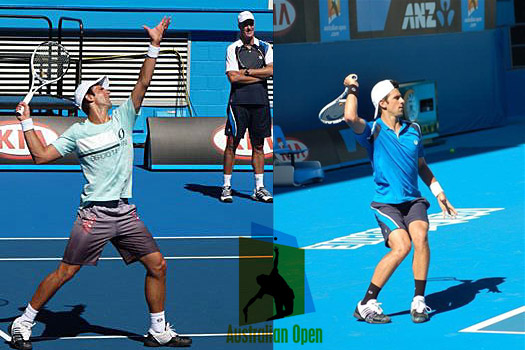 10. 01. 2010. · 2008 Australian Open champion Novak Djokovic took his first steps on court at Melbourne Park on Saturday when he practised on centre court at Rod Laver Arena.

Novak has been in Melbourne for two days and was spotted hitting at the nearby Kooyong Club on Friday, working up a sweat as part of his preparations for the gruelling conditions often offered up by the Australian Open

”I sincerely hope and I believe that I will get used to the conditions here better than last year,” Novak told Melbourne’s Herald Sun newspaper earlier this week.

”Last year I ended my title defence in the quarterfinals with the retirement (against Andy Roddick). That was what you would call the ugliest way that I could have finished that tournament.

“We always try to set up in the best possible shape and form for the grand slams which are the most important tournaments for all of us. I have all the reasons to believe I can perform my best tennis this year.”

Djokovic ended the 2009 season strongly, reclaiming his position at No.3 in the world behind Roger Federer and Rafael Nadal by storming to the Paris Masters title in November.

On the advice of his new coach, former US Open finalist Todd Martin, Djokovic spent his off-season training at altitude in mountains near Turin, Italy, before an intense training block in Dubai. He will put the finishing touches to his preparations by playing in next week’s AAMI Classic exhibition event at Kooyong.

”I’ve come 10 days before the first round, so I will get a couple of matches under my belt here and try to be 100 per cent ready,” he said. “Todd is just the person I need. He’s very calm and brings this calmness and freshness to the team. And he’s very strategic about everything that goes into tennis. I know that my game can always be improved and we’re trying to put some variety into my game, improve volleys and serve, elements that have been a little bit critical in my game.”