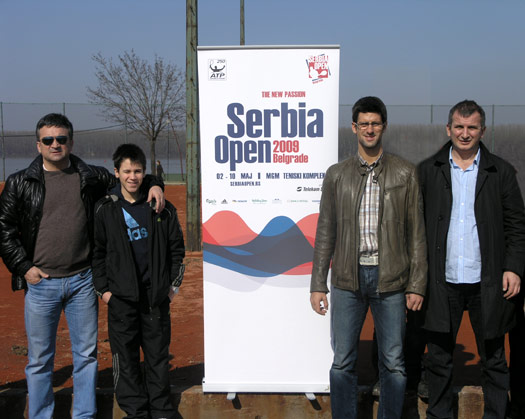 The tennis complex which is not seen in this part of Europe has been growing in recent months in the outline of the dilapidated sports centre Milan Gale Muskatirovic. Dry plums with marzipan, Novak Hill and Novak’s water, Carlsberg parties, top catering, promo village are just some of the details that will adorn tournament in Belgrade.

Not only because of the fascilities such as gigantic central stadium, a modern administrative building with a restaurant, tents similar to those in Dubai and mini squares, but also because of the atmosphere that will be talked about long after the tournament. All the credit goes to the first man of the ‘Serbia Open’, who showed, with great support from the city officials, that despite all the problems very ambitious plans can be carried out. And in a short period of time.

- Work is carried out in three shifts, 24 hours a day, and 200 workers from various companies are currently on the building site. We have imported a total of 150 tow equipment, but nothing is hard because we want to show to the world and to our tennis fans what a real tennis tournament is. There are some problems, that’s inevitable, but when I see the central building, courts, clay and kids, everything is forgotten. The financial crisis impeded us, but when we entered all of this in November, we couldn’t know what would happen. Because of all these circumstances we were thinking about the ordinary people, and we offered the cheepest price tickets ever seen in the ATP competitions. We wanted to enable those with thinner wallet to enjoy the top tennis at least for a moment- said Goran Djokovic.

Some things at Serbia Open in Dorcol will be similar to Roland Garros, and some to Wimbledon. However, there will be a lot of original details that will be recognised throughout the world.

- A screen (size of 40 square meters) will be set at the central court. That won’t be all. A screen twice as big as that will be in the part of the complex which will be named Novak Hill, inspired by Henman Hill at Wimbledon. Special companies from the Netherlands, Israel, Italy and Switzerland take care of electronics, and the latest technological achievements in this field will adorn the MGM center. Furthermore, Adidas part for fans will be built near the swimming pools. Those who want, will be able to play virtual tennis vs Novak on video animation. There is something similar at Roland Garros, and it proved to be excellent. It is interesting that Nole played against himself and failed to take a single point. However, I managed to take two. – said Goran laughing.

What will be on the menu? The players often complain about the food at the tournaments in the world.
- The whole catering will be organised by ‘Holiday Inn’ hotel. The top chefs will take care of it, and the things that most suit the players, such as chicken and pasta, will dominate on the menu. However, on the model of Wimbledon, where strawberries and champagne are served, we will have our specialty. It is dry plums with marzipan, which I hope will become recognisable detail of Serbia Open. -Djokovic concluded.
The tournament begins on May 2, with qualifying matches, and lasts till May,10. The prize money is 450,000 euros.

LIST OF PLAYERS NOT CONCLUDED
Baghdatis wants to come

The tournament’s no.1 star Novak Djokovic will be the host at the same time.. Stepanek, Canas, Nishikori, Hanescu are some of the names from abroad.
- We are satisfied with the list of the players that will take part, especially because the tournament will be held for the first time. One more place is left and there’s a posibility that some of the big names joins us. Marcos Baghdatis contacted us and said he wanted to participate. It is possible that we will give him the wildcard, but we will leave space to bring maybe some even more attractive player. As for the names that have previously been mentioned, for example Verdasco, he was already on Estoril Entry List, and couldn’t accept our invitation.

Treatment of players is a very important part of the tournament. Novak knows well what they need and lack during a competition, and we will try our best to host them in the right way. Among other things, that includes internet café in Players’ Lounge, we’ll organise a great Players’ Party for them. Everyone is asking about Belgrade clubs on the rivers and other kind of entertainment in our capital. We wish they feel a home-like atmosphere. We will be good hosts to the visitors too. We’ll organise Carlsberg parties for them. We’re already negotiating with well known DJs, but the greater part of the organisation is in hands of the company.

SPEC.
200,000 bottles of special water ‘Aqua Novak’ will be distributed to the visitors during the tournament. The producer is ‘Rajkovic’ spring from Valjevo.

GIGANTIC CENTRAL STADIUM
The largest structure in the Balkans

The stadium with specially constructed stands is dominant in the complex. It is similar to those in Gstaad, Kitzbuhel and St Maurice.
- When the central stadium is finished, it will host 7,500 spectators, and it will be the largest temporary construction of this type in the Balkans. It will be packed for the semifinals and the finals, no doubt. Sale is good for the other days and I believe the attendance will fulfil all expectations. The setting of the stands is going well, although we had a short delay. The Greek company that was working on that proved to be quite unprofessional, and even the entire project was endangered. That’s why we hired a team of people from Switzerland, who are doing the great job together with the experts from the BG tehnik firm. The hight of the stands is 6 meters, and at the top behind the seats, there will be podium with tents on the model of the atmosphere from the medieval castles.- says Djokovic.

SPEC.
The monument to Major Gavrilovic will be the central detail of one of the squares in the MGM complex, which will be surrounded by promo village with stands of well known companies.