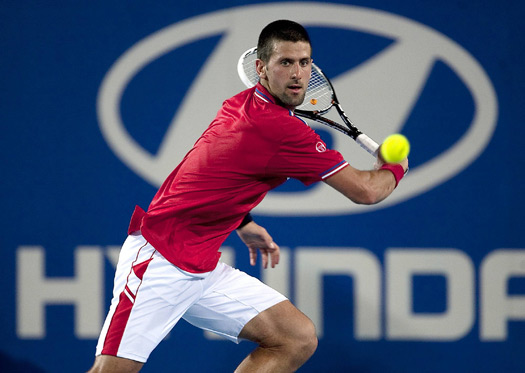 The best Serbian tennis player Novak Djokovic scored his second win in singles in 2011. He outplayed world no.54 and former world no.1 Australian Lleyton Hewitt in straight sets 6-2, 6-4 in 81 minutes, to bring second victory to Serbia in group A at the 23rd Hopman Cup on Tuesday.

We saw exciting mixed doubles match between Serbia’s Djokovic and Ivanovic, and Australia’s Hewitt and Molik. Nole and Ana triumphed in super tie-breaker, 6-7, 7-5, 10-6, and now they need only one win on Thursday against Belgium to secure the first place in the group and reach the finals.

Nole saved four break points in the fifth game of the first set and then broke Hewitt’s serve twice, in the sixth and eighth games, to take the set 6-2.

Djokovic made a flying start to the second set breaking his opponent in the second game, but the Australian fought back for 2-2. The next five games remained on serve until Hewitt doublefaulted on a break/match point in the tenth game for 6-4 for Serbia.

“I played great,” said Nole after the singles encounter. “From the start of the match, especially at the end of the first set, I played some of my best tennis in a year and a half.”

The last match in group A, on January 6 at 8am CET, sees Serbia vs Belgium (Ana vs Henin, Novak vs Bemelmans).