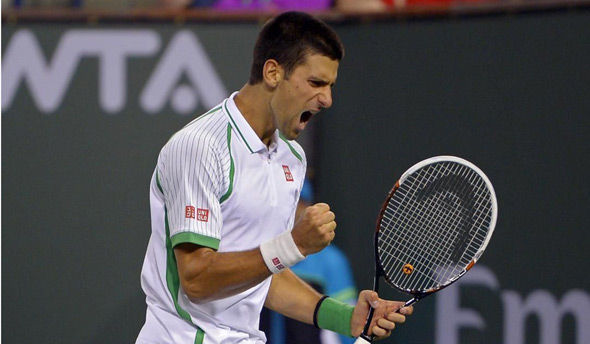 The top seed needed just 54 minutes to book his place in the last four at the Indian Wells Tennis Garden and improved his H2H record against the Frenchman to 10-5, winning the last eight matches.

Novak pressed Tsonga’s serve from the beginning of the match. He made a break in the fifth game and once again in the ninth to take the opening set on his first opportunity.

Nole continued his dominance in the second set. He raced to a 3-0 lead and converted one more chance in the sixth game, serving it out a game later for his sixth victory in as many matches vs top 10 opponents in 2013.

“I definitely feel very happy about this performance today,” the world no.1 said after improving his record for the season to 17-0. “I thought Jo didn’t play his best. He made a lot of unforced errors and his serve wasn’t going well and that made my life a lot easier on the court.”

“I served really well and used the shots around the court well. When it was important, I didn’t allow him to come back to the match. I didn’t allow him to have an opportunity to believe that he can maybe have a break back. So that was very important for me to stay mentally committed throughout the whole match.”

Djokovic, who is attempting to capture his 14th ATP World Tour Masters 1000 title, won 90 percent of his first-serve points and was 7/7 on net approaches.

The Serbian star takes an 8-2 lead against the Argentine into the Saturday’s encounter (14.00 local time / 22.00 CET). He won their last four meetings, the most recent was in the Dubai Duty Free Tennis Championships semi-final 6-3, 7-6(4).

“Del Potro is a powerful hitter from back of the court, he has a big serve. He moves really well for his height. He’s a US Open champion, so he knows how to play on the big stage. It is going to be a big challenge,” Nole said.

Rafael Nadal (5) will contest the first semi-final against Tomas Berdych (6).