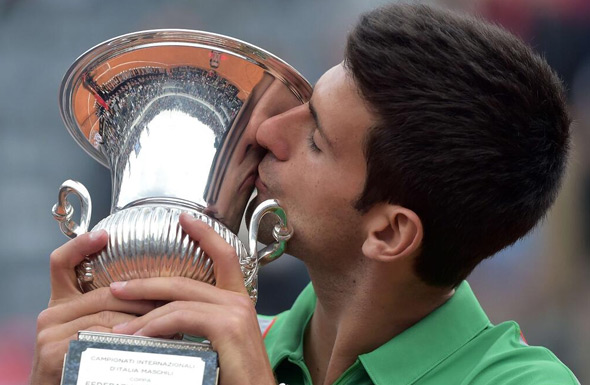 World no.2 Novak Djokovic captured his 44th career title and third in Rome, when he beat the defending champion Rafael Nadal 4-6, 6-3, 6-3 on Sunday.

After losing the opening set, Novak regrouped and took the second and third, sealing the victory in two hours and 19 minutes.

The world no.2 won 71% of his first service points and converted six of his 14 break point chances, saving two of six break points he faced.

“It’s been a great week considering where I’ve been a few weeks ago with the wrist injury,” said Djokovic following the match. “Luckily for me, I played with no pain and increased the level of tennis as the week went on. I’ve had some tough matches. Four out of five matches were three-setters and I had to come back from one set down yesterday against Raonic and today again. That gives me a lot of confidence. Winning against Rafa in the final of a big tournament on clay, his preferred surface, is definitely a confidence booster.”

The Rome final was the 41st meeting between Djokovic and Nadal (H2H record 19-22). Novak recorded his fourth win in a row over the Spaniard.

The ATP Masters 1000 event in the capital of Italy was the last preparation for the second Grand Slam of the season, the Roland Garros, taking place in Paris from May 25 to June 8.