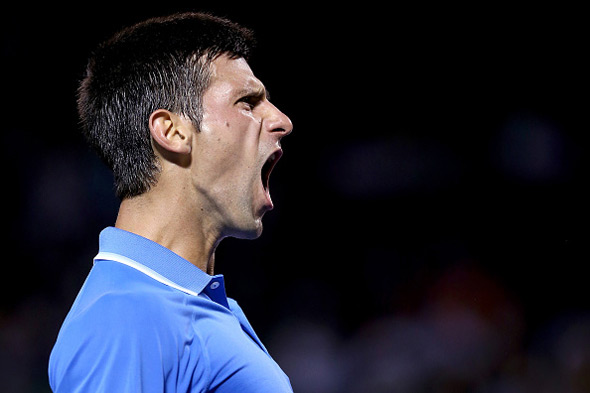 Brilliant display from Novak who will face Andy Murray in his sixth Miami Open presented by Itaú final on Sunday!

The only break point opportunity for Novak in the opening set was also a set point at 6-5. Isner saved it to force a tie-breaker. Djokovic won it in convincing fashion 7-3.

Novak broke twice in the second set to clinch the victory, moving one step closer to retaining his title at Crandon Park.

The 27-year-old Belgrade native was impressive on the return and solid on serve. He won 81% of points on his first serve and faced no break points in the 90-minute win.

“I’m glad I managed to realise everything I intended tactically before the match,” said Novak. “It’s always tough to play someone who serves that well. It is important to hang in there mentally, be patient and make him play. I put a lot of pressure on his second serves, moved him a round. I’m pleased with the performance.”

Looking ahead to the Murray clash, Novak said: “Andy has been playing so well this year, and especially here in Miami over the years. He won it two times. He spends a lot of time here and practises on these courts, so he is familiar with the conditions. It’s going to be different for me because I played two night matches, the final is going to be at 1 o’clock. Hopefully I can adjust and perform as well as I did tonight.”