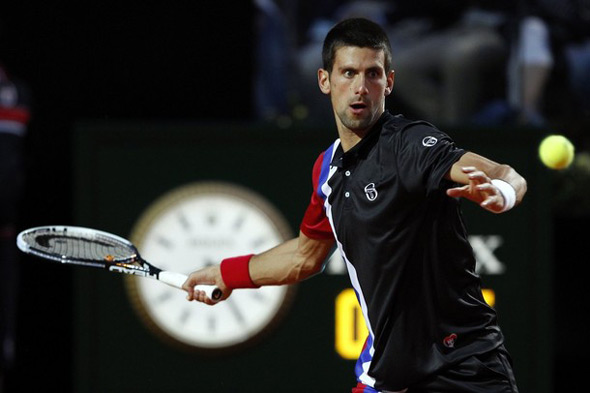 Nole will play for his 12th ATP World Tour Masters 1000 crown on Monday!

Novak broke twice, in the third and seventh games, to win the opening set 6-2 in 34 minutes.

The 24-year-old Serb was dominating the baseline rallies, forcing Federer to make errors.

He made a break in the seventh game of the second set and consolidated it for 5-3 lead.  Having squandered the opportunity to win the match serving at 5-4, Nole recovered to get the job done in the tie-break (7-4)  for his eleventh victory over Federer in their 25 matches.

World no.1 will attempt to win the title at the Foro Italico for the third time when he faces Rafael Nadal in 2011 final repeat (Novak won 6-4, 6-4).

Rafa defeated his fellow Spaniard David Ferrer 7-6(6), 6-0 in the first semi-final of the day.