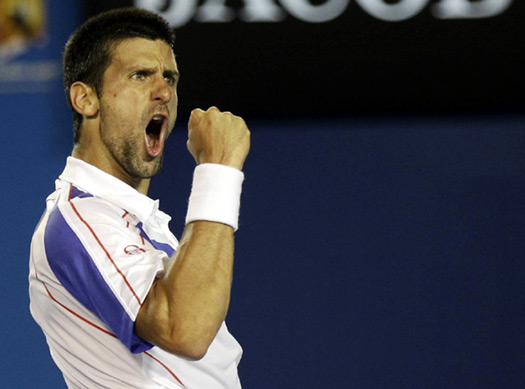 World no.3 Novak Djokovic advanced to his fourth career Grand Slam final and second at Australian Open, after he defeated world no.2 and four-time defending champion Roger Federer in straight sets 7-6(3), 7-5, 6-4 in 3 hours on Rod Laver Arena on Thursday.

Novak won the coin toss, and without hesitation chose to serve first. He made two double faults and faced a break point in the opening game, but held to go ahead. Djokovic had a 0-30 lead on Federer’s serve in the sixth game with two great forehands to force errors from his opponent, but the Swiss responded with two hammer shots of his own. A backhand into the net took the game into deuce. The world number two held his composure with two well-worked points to hold for 3-3. Nole was pushed to deuce in the ninth game, but closed it with a forehand to stay ahead. The set was decided in a tiebreaker. The 23-year-old Belgrade native made three mini breaks, two more than Federer, and won it 7-3 in 57 minutes.

Nole made a break in the third game of the second set, but then lost his momentum and found himself a break down, 2-5, losing four games in a row. He didn’t lose selfconfidence and gave his best to stay in the set, putting pressure on Federer. The 2008 champion found a good rhythm again, broke back twice, in the ninth and eleventh games, and served out the set 7-5 in 61 minutes.

The best Serbian tennis player and Davis Cup champion was tested in the second game of the third set, but he saved three break points to stay on course. He broke Federer in the third game and held for 3-1 lead. The Swiss fought back in the eighth game to level the result to 4-all, but Nole broke back immediately to earn himself chance to serve for the match. He did it successfully, converting his third match point for 6-4, booking his place in the grand finals.

Novak fired 6 aces and served at 69 per cent.

Djokovic converted 5 of his 14 break points, while Federer capitalised on only 3 of his 10 chances for break.

Nole improved to 7-13 lifetime against the Swiss.