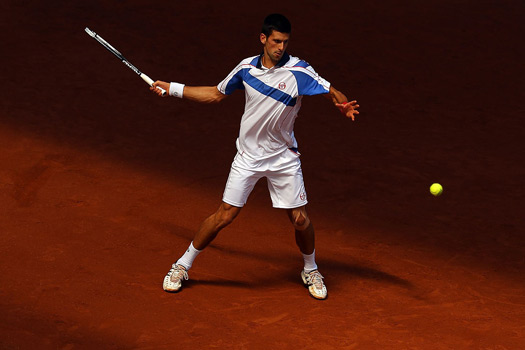 World no.2 Novak Djokovic extended his season-opening winning streak to 30 matches at the Mutua Madrid Open, surpassing the best start in men’s tennis in 25 years!

Djokovic, the Australian Open champion, beat no.6 seed Spaniard David Ferrer, 6-4, 4-6, 6-3 in 2 hours and 27 minutes on Friday to advance to the semi-finals of the ATP World Tour Masters 1000 tournament.

Novak was broken in the second game of the opening set, but he broke back immediately and held to level the result. The 23-year-old Belgrade native broke Ferrer’s serve once again in the ninth game and closed the set 6-4 in 44 minutes.

Djokovic made a break in the opening game of the second set and consolidated it for 2-0 lead. He lost his momentum in the sixth game and let his opponent come back into the match. Novak was serving to stay in the set, when Ferrer broke him for the second time to take the set 6-4 and level the match up at one set all.

The second-seeded Serb stayed calm and focused, mentally strong. He made a crucial break in the fifth game of the decisive final set, kept the advantage and broke the Spaniard again in the ninth game to seal the set and match 6-3.

This is Novak’s first win over Ferrer on clay.

“I expected a very close match as he never gives up and he’s a great fighter,” Djokovic said of Ferrer in a postmatch interview.

“I needed to work hard and I was in a good position at a set and a break up but I started playing too defensive. He got into the match. It was really close in the third. I got the crucial break.”

“I was aware of the quality of my opponent today and the fact that I never won against him on clay,” Nole said. “I needed to be emotionally stable and handle in the best possible way because obviously I had to stay focused and work hard and that crowd was behind him which was expected. I wanted to use the opportunity and that’s what I did.”

Nole has won 32 straight matches going back to last year’s Davis Cup final. The best Serbian tennis player surpassed former world no.1 Ivan Lendl and is now third in the all-time list of consecutive wins from the start of year.

The record for a winning start to a season remains 42 matches, set by John McEnroe in 1984, with Bjorn Borg in second place following his 31 straight wins in 1980.

Novak will face world no.36 unseeded Thomaz Bellucci for a place in his first Madrid finals tomorrow at 7pm CET.

“Bellucci is obviously hitting the ball really well at this tournament and it’s his favourite surface so it’s going to be another tough match tomorrow. He’s a clay court specialist with surprising results beating a couple of seeded players with some great wins. It’ll be interesting.”