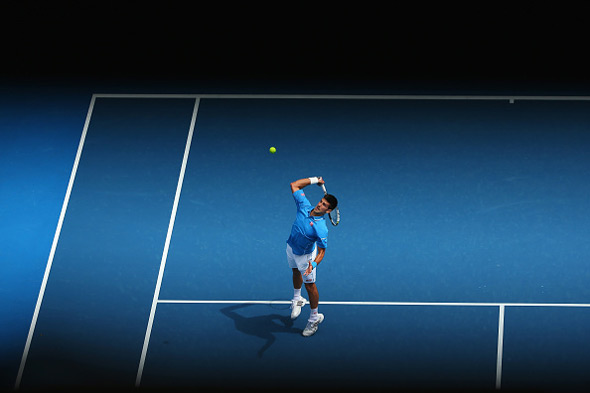 Novak is through to his fifth Australian Open semi-final!

Novak moved on to the last four having been broken just once in the tournament. He has advanced to the semis without conceding a set for the first time since his title run in 2008.

Raonic kept pace with the top-seeded Serb only in the first set. Novak failed to convert four break points, but stayed calm and focused to win a tie-breaker 7-5 after 55 minutes of play.

The 27-year-old Belgrade native kept errors to a minimum and held serve with ease, neutralising the big-serving Canadian’s strokes with precision and variation on the return. He broke once in the second set and twice in the third, sealing win with a backhand volley.

“I returned very well, tried to get as many balls back in play as I could,” said Djokovic. “I felt I had a good chance from the back of the court. In some games I had to let it go and wait for the opportunities to present themselves. He’s one of the rising stars, one of the three players challenging the best players in the world. He’s already an established Top 10 player, I wish him the best for the rest of the season.”

Looking ahead to the challenge, the world no.1 said: “I’m expecting a marathon like the last couple of years and I’m sure the both of us will give our best to perform the best possible tennis. We always ask each other the most of our abilities and entertain the crowd.”