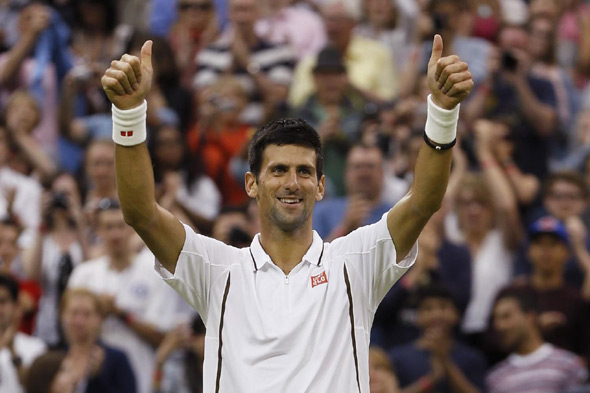 It was his 50th tour-level win on grass and saw him through to the Championships last 16 for the fifth year in a row.

Nole broke Chardy’s resistance in the eighth game of the opening set and consolidated it for 6-3 in 29 minutes.

The reigning Australian Open titlist made a double break in both second and third sets, wrapping-up the one-sided contest. He improved his perfect record against Chardy to 7-0.

“It’s never easy against Chardy. He’s a quality player; he won Wimbledon juniors. I managed to neutralize his serve, made a crucial break at 4-3 in the first set, and everything went my way really,” said the only former Wimbledon champion left in the men’s draw. “I did everything I wanted, didn’t lose many points on serve. When you play that well, you feel great, you feel confident. Not many times it happens on grass against a big server that you get to play this well and return this well. I managed to find the right balance. This kind of performance came in the right time for me.”

Djokovic converted five of his 16 break point chances and did not face a single break point during the match, losing just six points on his own serve.

He won 93 percent of his first-serve points and 86% of points on his second serve.

Novak will face no.13 seed and former no.2 Tommy Haas on Monday, for a place in the quarter-finals. The German beat Spaniard Feliciano Lopez earlier today.

The six-time Major winner leads Haas in their career head-to-head 5-3; the Hamburg native won both of their grass-court encounters (2009 Halle and Wimbledon).

Looking ahead to the Haas clash, Novak said: “He’s playing maybe the best tennis ever. He’s feeling great, he’s so fit. I don’t see any clear favorite to be honest.”