McEnroe: Novak’s winning streak is more impressive then mine! 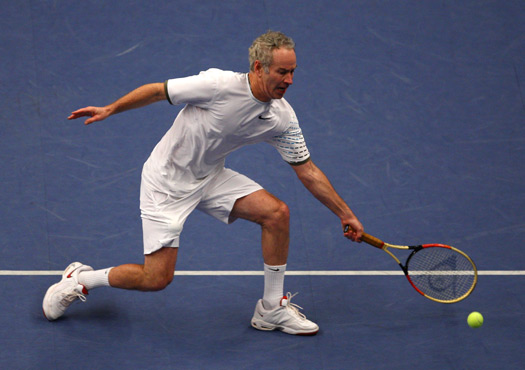 John McEnroe believes that the 37-match winning streak that Novak Djokovic has put together in 2011 is even more impressive than the record-breaking run of 42 wins that the American registered in 1984.

McEnroe, who revealed that he is to return to the Royal Albert Hall in London for the AEGON Masters Tennis tournament in December, has been amazed by what he has seen from the Serbian player.

“Given that there’s more competition, more athleticism and deeper fields now, I’d say his record is even more impressive than mine”, said McEnroe.

“Especially given that in 1984, the major in Australia was played at the end of the year, whereas he had to win it (as part of his streak). I was coming into my first Grand Slam of the year at the French, where the streak was broken (in the final against Ivan Lendl). So things are different. Also, he came into the year at No.3 and to be able to dominate [higher ranked players] the way he has, well, to put it mildly, it’s been quite amazing to see what he’s done and how much more confidently he’s playing.”

McEnroe, who went on to dismantle Jimmy Connors in one of the greatest Wimbledon performances ever seen in the 1984 final, said that he is actually pulling for Djokovic to break his record.

“I’m quite excited that he might break my record at the French Open”, he said. “Records are made to be broken. It’s the definition of mixed emotions. I think I’ve pretty much lost every record that I had but, at the same time, I know that this has been a shot in the arm for our sport. Everyone knew he was capable, because he had won a major and he showed some heart at the [2010 US] Open, when he came from two match points down [in the semi-final against Roger Federer]. To see what he’s done since then, I hasten to say that even he’s a little surprised.”

The American, who won the title at the Royal Albert Hall in 1997, 1998, 1999 and 2003, is looking forward to returning to the ATP Champions Tour event for the first time in three years.

“The London tournament has always been one of my favourite events of the year”, he said. “The crowds are really fantastic, the atmosphere is great and the Royal Albert Hall is one of the most spectacular arenas I’ve ever played in. I still love to compete and I always play to win so I am training hard to be able to bring my best tennis back to London.”

The tickets are available for the tournament which starts on November 30th: http://bit.ly/jXrs9H

For more information about the tournament, go to www.aegonmasterstennis.com.

For more information about the ATP Champions Tour – www.atpchampionstour.com.