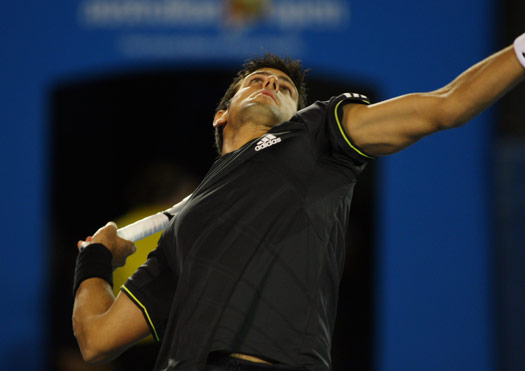 The Australian Open defending champion is out of the tournament after he had to retire in the fourth set to American Andy Roddick after 2 hours and 29 minutes. The result was 7:6(3) 4:6 2:6 1:2.

Both players were racing through their holds in the first set. It went to a tie-breaker. Djokovic sealed it 7-3.

Novak was 0-30 down in the fifth game of the second set, but he won four points in a row to go up 3:2. He didn’t manage to do the same in the seventh game when Roddick earned himself two break points, the first of the match. The American converted the first to take a lead. He held to 15 to increase it to 5:3. No.7 seed earned himself a triple set point serving for the set, and won it easily 6:4.

Djokovic looked more tired than his opponent. The temperature was about 40 degrees on court. Roddick made a break at the start of the third set. Nole earned his first break point of the match and broke back immediately for 1:1. Djokovic called a trainer after he held his service. He didn’t look good. The Serb wasn’t moving well. He continued to struggle in the heat. Roddick broke him for the second time in the fifth game to go up 3:2 and then held to increase his lead. The American won four consecutive points on Novak’s service and broke again for 5:2. He held to love to close the set 6:2.

”Conditions were extreme today. It did affect more on me than him, as you could see,” Novak said of temperatures that reached 95 degrees. “But, you know, that was the situation. I just have to cope with it. Really tried my best, but sometimes you can’t fight against your own body.”

Djokovic hit 8 aces to Roddick’s 16.
Nole made 39 unforced errors to Andy’s 14.
Both players had 43 winners.
Novak converted his only break point, while Roddick capitalised on 5 of his 12 break point oportunities.

Roddick will play in the semifinals against the winner of the match between three-time Australian Open champion Swiss Roger Federer (2) and Argentine Juan Martin Del Potro (8).