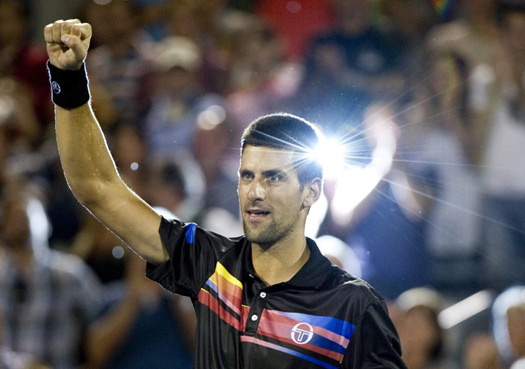 Top-seeded Novak Djokovic moved into the Rogers Cup final after 59 minutes of play at Uniprix Stadium on Saturday evening.

Nole was 6-4, 3-0 up when no.13 seed Frenchman Jo-Wilfried Tsonga retired with an injury.

The Serb will face sixth-seeded Mardy Fish in the ATP World Tour Masters 1000 event final after the American beat Janko Tipsarevic 6-3, 6-4 earlier in the day.

Novak failed to convert his four break point chances in the fourth game, but earned another opportunity in the tenth game and capitalised on it to take the first set 6-4 in 39 minutes.

He broke Tsonga again in the second game of the second set and held for 3-0 when the Frenchman decided to retire.

“I think we played high quality tennis in the first set,” Novak said. “It was even. I was returning really well, had a lot of break ball opportunities. The break came at the right time. When you have a set advantage, obviously mentally, it gives you a big relief. You start playing even better in the second set. It was important for me to try to use the opportunity in his first service games in the start of the second set and make a constant pressure on his service with my returns. That’s what I did. I made the break. Overall I think I’ve been playing last two matches on a very, very high level.”

The 24-year-old Belgrade native will be playing in his ninth ATP World Tour level final this season. He’s won eight out of nine tournaments he entered.

The final of the Rogers Cup between the world no.1 and world no.8 is set to get underway on Sunday at 3 pm local time (9 pm CET).

The players are clashing for the seventh time, Nole leads with a 6-0 head-to-head record against the American.

“It’s important when you play a player like Mardy to hold your composure, to be patient and wait, wait for the chance on his service games, try to have high percentage of the first serves and stay aggressive. I know he’s going to come to the net. I know he’s going to take his chances. He’s been playing always like that.”