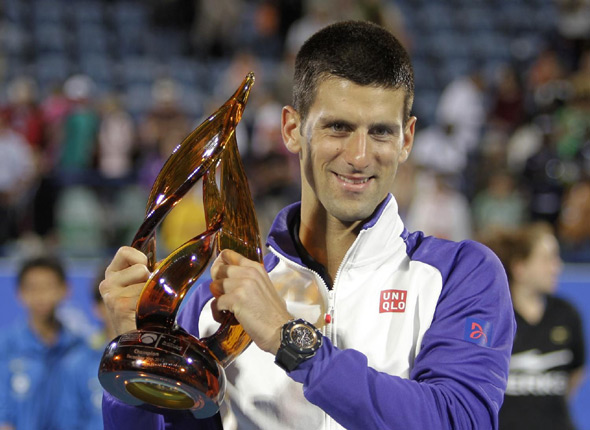 Serbian tennis star and world number two Novak Djokovic will be returning to The Mubadala World Tennis Championship this year to defend his title, aiming for his third victory in third appearance.

The event brings together six of the top 10 players in a 3-day competition held at the Abu Dhabi International Tennis Complex at Zayed Sports City from December 26 to 28. The strongest ever line-up features Rafael Nadal, Novak Djokovic, David Ferrer, Andy Murray, Stanislas Wawrinka and Jo-Wilfried Tsonga, all kicking off their tennis season at the UAE.

It will be Novak’s only preparation for the 2014 Australian Open. For the past two years, he has gone on from his victories in Abu Dhabi to win the first Grand Slam event of the year.

“I’m really excited to be coming back to Abu Dhabi this year. The Mubadala World Tennis Championship is proving to be a great way to kick-start my season, and gives me the chance to get warm-weather play against some of the best guys in tennis ahead of the Australian Open,“ Djokovic said. “No doubt I’ll face some tough competition again, but I’m hungry for the hat trick and I’ll be ready to defend my crown. The crowds in Abu Dhabi always create an amazing atmosphere and I hope to give them a great few days of tennis and entertainment again this year.”

Novak is no.2 seed and has a bye for the first day of action.

Nadal will face Ferrer (def. Wawrinka) in the first match of the day.

The final day of the event will see the third place play-off held before the final.

Making his debut in Abu Dhabi in 2011, Novak has never lost a match at the tournament.

The 2012 event culminated in the most exciting final ever, a 2 hour 34 minute battle between defending Champion Djokovic and Spaniard Nicolas Almagro.