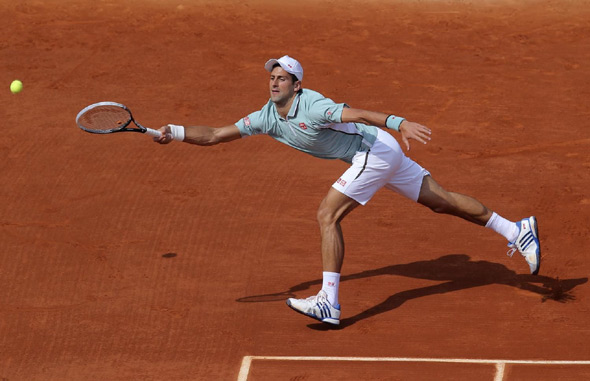 There were no chances for break till the seventh game, when Novak struggled with his service rhythm. Nadal went on to create the first break point opportunity, but Nole saved it. The Spaniard earned two more and took a 4-3 lead on his third chance. He confirmed the break and won the set 6-4 in 51 minutes.

Novak was broken in the fifth game of the second set, but quickly managed to recompose himself. He made a double break and clinched the set 6-3, winning four games in a row.

Nadal set up an early break point in the third set. Nole saved it with a winner onto the sideline but the Manacor native got umpire Pascal Maria down to check. Maria agreed it was out handing the break to the Spaniard, although hawkeye for TV audience showed the ball was in. It clearly distracted Novak. He was broken once again and lost the set 6-1.

The Serbian no.1 was down a break twice in the fourth set. Nadal was serving for win at 5-6, but the fighting Nole broke back to force a tie-break, and won it in convincing fashion 7-3.

The 26-year-old Belgrade native took the momentum into a deciding final set. He broke his rival’s serve in the opening game and saved a break point before consolidating it for a 2-0 lead. Nadal took advantage of Novak’s errors in the eighth game and came back to level the set. The Spaniard earned three match points in the 16th game. Nole saved two, but then hit a forehand long and the defending champion was through to his eighth French Open final.

“It’s been an unbelievable match to be a part of, but all I can feel now is disappointment. I wanted this title so much. I will come back to Paris, to this Grand Slam, and I will keep on trying to win it,“ said Novak after an epic semifinal clash. “I congratulate him because he showed the courage in the right moments and went for his shots. That’s why he’s a champion. I gave my best, I did… I really tried to come back. The third set wasn’t great at all, but I managed to come back and started playing really really well towards the end of the match. But it wasn’t good enough.”

The two great champions squared off for the 35th time, with the Spaniard now leading their ATP Head2Head 20-15.

Djokovic was looking to become the eighth man in history to complete the career Grand Slam of all four Major titles.

Novak will play his next official match at the Wimbledon, the most prestigious tennis tournament in the world, taking place in London from June 24 to July 7.