Nadal too strong, 4:1 for Spain! Serbia in the World Group Play-offs! 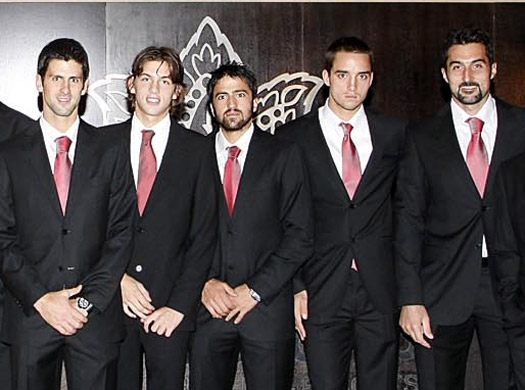 Novak Djokovic didn’t manage to beat Rafael Nadal to equalise the tie, and bring the hope that Serbia might play in the World Group quarterfinals.

Novak faced scare already in the third game of the match, but he managed to save two break points for 2:1. World number three made his first double fault to hand Nadal chance for a break. The Spaniard didn’t have to work hard for it, because Djokovic made an unforced error to go down 2:3. Nadal lost focus in the next game, made three unforced errors for 0-40. Nole used the second break point to equalise the score. He then held for 4:3, but that was all he did in the first set. He got only one point in the next three games, and Nadal won the set 6:4.

The crucial moment of the second set happened in the ninth game when Nadal made a break to take a lead. He served it out to take the set 6:4.

After Novak failed to convert two break points in the second game of the third set, the level of his game dropped, he fell mentally and started making more errors. He got broken three times, and lost six games in a row for the final result, 6:1.

David Ferrer defeated Viktor Troicki in the dead rubber. The result was 6:0 6:3.

Serbia will try to stay in the World Group. The Play-offs will take place in September 18-20.