Nole advances to second round in Beijing 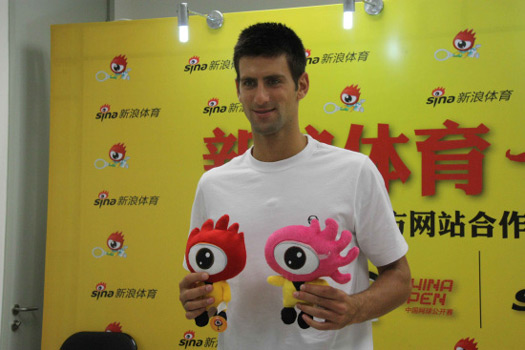 Though he played against the homecrowd hope, Djokovic got fantastic support in the capital of China.

Djokovic made a break in the fifth game of the second set and then held for 4-2. He broke his opponent’s service once again in the ninth game for 6-3 and a place in the second round of China Open.

Novak hit 3 aces to Gong’s 1, and made 1 double fault to Gong’s 2.
The Serb converted 4 of his 11 break point opportunities, while the Chinese didn’t have a single chance for break.
Djokovic won 66 points to Gong’s 41.

“It feels good to be back at a court where I’ve had a lot success in the last couple years,” said Djokovic, a bronze medalist at the 2008 Beijing Olympics and 2009 China Open champion. “It’s a beautiful stadium, and of course Chinese tennis fans are some of the best in the world.”

“I think my serve lately is quite good comparing to the serve I had in last 12 months. I’m really happy with the improvement that I had in the recent months, and we’ve been working on it hard. It’s a process that takes time,” added Novak.

The world no.2 will next play against no.19 in the ATP Rankings Mardy Fish. The American defeated Janko Tipsarevic 6-2, 7-6(5).

They’ve met five times, Nole won all encounters. The last was in the fourth round of US Open when the Serb won in straight sets.