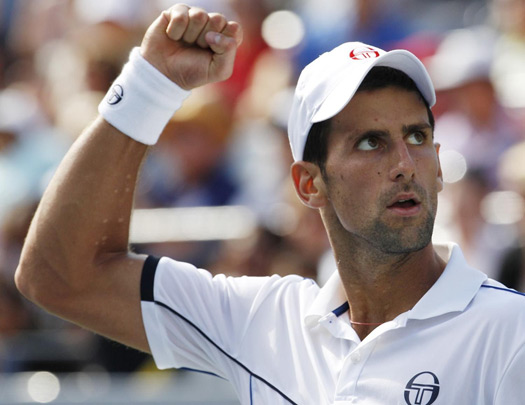 Nole is just a step away from his best ever result at Flushing Meadows and first US Open title.

In order to achive the phenomenal success, capture his tenth title and 64th victory in 2011, the world no.1 will need to beat the last man standing in his way, no.2 seed Rafael Nadal.

Novak had a day off after his miraculous semi-final win over Federer, when he fought back from two sets down and saved two match points before clinching one of the biggest wins of his career.

Nole and Rafa will meet in the US Open final on Monday for a second straight year. It’s the first repeat of Men’s final since 1988.

For Rafael Nadal to retain his US Open title, he’ll have to do something he hasn’t done all year: beat Novak. They have met 28 times, the Spaniard leads 16-12, but Nole defeated Nadal in their past five encounters. All five have been in finals – Indian Wells, Miami, Madrid, Rome and Wimbledon.

“I know that I have a game that is good enough to win against him,” said Djokovic. “I have proved that this year on three different surfaces, so I believe that I have a good chance. I need to go out on the court believing I can win. But we’re talking about a player who has won 10 majors already in his career and he’s only 25. He’s defending his title.”

“I think last year throughout the whole tournament and in the final I have never seen him serve better. So I think again it depends on my serve and his serve, as well. It’s going to be a tough match.”

The defending champion is aware the situation now is different than last year when he lifted his first US Open trophy.

“He’s obviously the favorite for the final,” Nadal said after beating Andy Murray in the semi-finals. “I know I have to do something better than the other matches to try to change the situation. I am not very happy about my mental performance against him this year. That’s what I’m going to try to change for Monday.”

Novak has won nine titles in 2011 and lost just two of the 65 matches he has played.

The 2011 Australian Open and Wimbledon champion is aiming to win his third Grand Slam title of the season. With the win, he would become the sixth man in the Open Era to achive that.

A victory in the finals would bring Novak additional 800 ponts and increase his advantage over Nadal in the ATP Rankings to over 4,000 points.