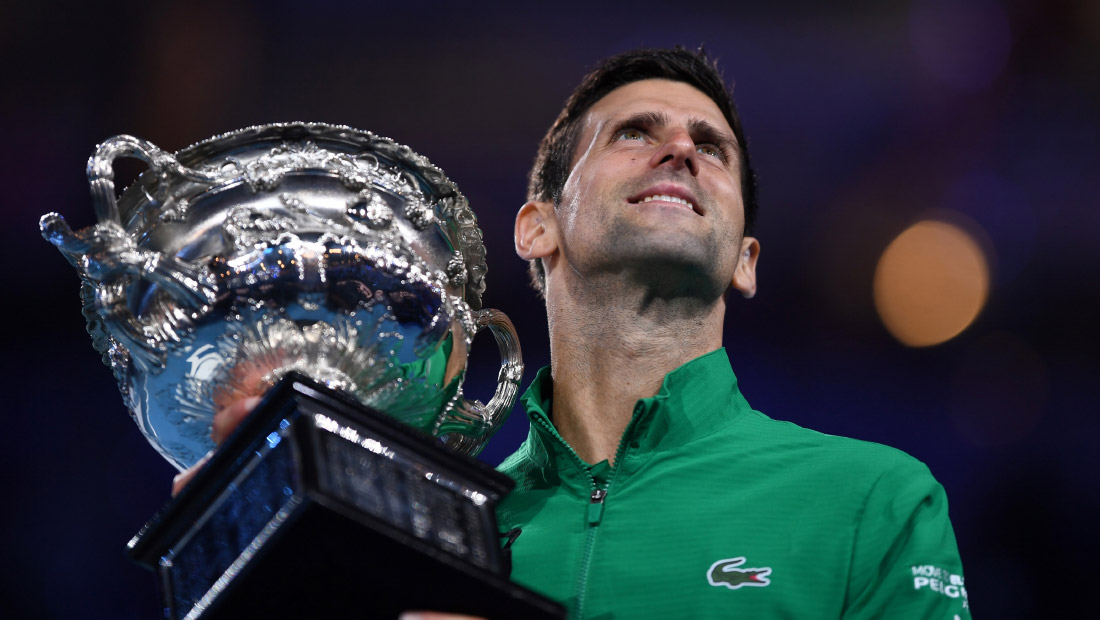 The Serbian star notched a record-extending eighth crown in Melbourne Park, adding it to his Grand Slam titles collection of now 17 major trophies in total.

With the trophy on the line, second seed Novak Djokovic produced a great display to reign at the Australian Open for the eighth time. He overcame a determined effort from Dominic Thiem to prevail 6-4, 4-6, 2-6, 6-3, 6-4 on Sunday evening.

Novak put Thiem under pressure from the beginning. He broke in the second game and consolidated it for 3-0 lead. The Austrian fought back in the seventh game, but Djokovic converted another chance in the 10th and wrapped it up when Thiem double-faulted.

The momentum of the match swung to no.5 seed in the second set. He went on a run of six straight games from 4-4 in the second, to 4-0 in the third set, and took a two-sets-to-one lead.

Djokovic kept fighting and managed to convert his break point opportunity in the eighth game of the fourth set, then closed it out with a hold to love, to force a decider.

The 32-year-old Belgrade native played his best tennis when it mattered most. He made a crucial break in the third game of the fifth set and kept the advantage until the end to secure his 78th career title.

Novak capitalised on five of his 12 break points, the same as his rival, and won 24 of his 29 points at the net. He improved to a perfect 13-0 record on the season.

Djokovic and Thiem met for the 11th time, the Serb now leads their H2H series 7-4.

“I would like to start by saying congratulations to Dominic for an amazing tournament,” said Novak, during the on-court ceremony. “It wasn’t meant to be tonight. Tough luck and it was a tough match, but you were very close to winning it. You definitely have a lot more time in your career and I’m sure that you will get one of the Grand Slam trophies, more than one. This tournament sets a high standard for all the other tournaments around the world and it’s definitely my favourite court, my favourite stadium in the world. I’m blessed to hold this trophy once again.”

Following the remarkable triumph, Novak will return to no.1 on February 3.

With 17 Grand Slam titles under his belt, Nole is now closer to Rafael Nadal (19) and Roger Federer (20) in the all-time major singles championship list.

Djokovic has become the first player in the Open Era to win Grand Slam titles across three decades.