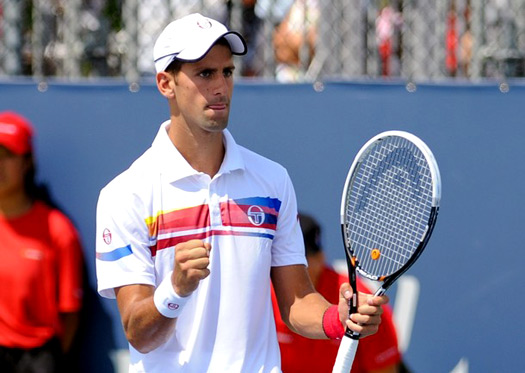 Top seed Novak Djokovic opened his Montreal campaign with a 7-5, 6-1 win over Russian Nikolay Davydenko (30) in 96 minutes on his no.1 debut.

Very unusual first set. There were 7 breaks of serve in 61 minutes. Nole had a slow start, but after he warmed up in what was his first singles match in a month, he was unstoppable.

The 24-year-old Belgrade native was dominant in the second set and took it 6-1 in 35 minutes.

“He didn’t give me a lot of rhythm in the start of the match,” said Novak. “I didn’t play a match for four weeks. It took me some time to get used to the conditions, get into the match. I needed to hang in there. I needed to wait for the chances. I did. I turned the match around on 4-1 when I broke him the first time. Then I felt much more comfortable.”

The ATP’s top player reflected on his new status: “Being no.1 is a big responsibility, not just on the court but off the court as well. Just trying to handle it in the best possible way, but on the other side trying to keep my life very simple, the way it was before. I haven’t changed my approach to my profession, to the sport, to my practices, to my matches. This is the way it is supposed to stay. Luckily I have a team of people that is keeping me on the ground and we are really working hard. I am motivated to make more success and to win more tournaments regardless of my ranking.”

Djokovic claimed his 49th victory of the season in 50 matches (his only defeat came in the semis of Roland Garros).

The 2011 Australian Open and Wimbledon champion will bid to become the first man ever to win five Masters 1000 titles in a season. This year he has won Indian Wells, Miami, Rome and Madrid.

Nole will next face world no.29 Marin Cilic. The Croat upset no.16 seed Argentine Juan Martin Del Potro 6-3, 6-4. The third round match is scheduled on Thursday at 2 pm local time (8 pm CET).

Novak has won all of their five previous encounters.

Nole and Janko did not go on court last night. They should play their second round doubles match against seventh-seeded Poles Fyrstenberg and Matkowski later in the evening.