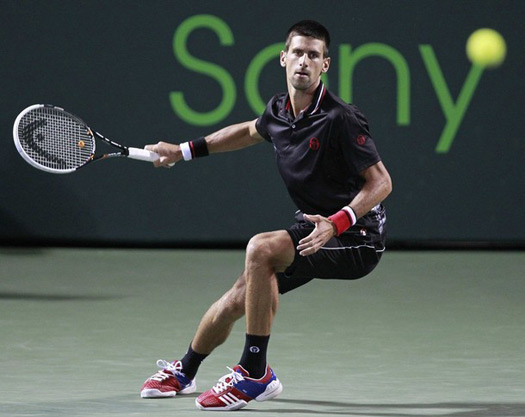 Top seed and defending champion needed one hour and 31 minutes to beat the Cypriot and advance into the third round of the second ATP World Tour Masters 1000 event of the season, held in Key Biscayne, Miami.

Novak made a break in the fifth game of the opening set which was enough for him to take it 6-4 in 37 minutes.

The 24-year-old Belgrade native broke Baghdatis in the third game of the second set and consolidated it for 3-1 lead. Marcos had two break points in the eighth game but Nole kept his composure and held after great fight that lasted 16 minutes. He closed the set and match 6-4.

The Serbian world no.1 won 73 per cent of his service points, saving both break points he faced and converting 2 of his 3 chances for break.

“He definitely deserves to be one of the seeded players,” said Novak. “Obviously he struggled a little bit with injuries that took him away from the tour. But he’s a quality player, there is no doubt. He’s very solid from both sides. He has a really good first serve; he’s an aggressive player, and he has a very flat shot. I thought I played really well. Towards the end I made more unforced errors, but generally it was a good performance for my first match.”

Novak will next take on his friend and compatriot Viktor Troicki (27), who defeated Spaniard Guillermo Garcia-Lopez in three sets 4-6, 6-1, 6-4 in their first-round encounter.