Nole continues perfect run, advances to third round in Madrid 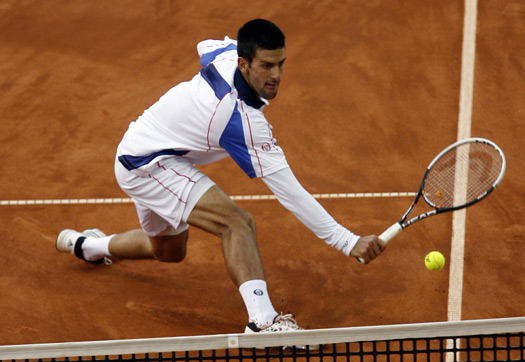 Novak wrapped up the victory in 1hour and 40 minutes to improve to a 28-0 this season and is now only one match short of equalling Ivan Lendl’s 29-0 start in 1986.

“Well it’s a great honour of course it’s very flattering to be part of that elite but it’s not my priority,” said Djokovic. “I’m really taking one match at a time.”

Nole broke Anderson’s serve in the eighth game of the opening set and raced through a service hold to seal the set 6-3 in 48 minutes.

Anderson earned two break points in the second game of the second set, but the 23-year-old Belgrade native won four points in a row to level at 1-all. Djokovic made a crucial break in the seventh game and kept the advantage till the end to close the set and match 6-4.

“Well I’m happy with today’s performance first, its obviously the first match in Madrid after two years, and conditions here are really fast and its hard to control the ball,” said Novak after the match.

“If you’re playing a good server like Anderson it’s a big effort to make a break and I tried very hard, it was a lot of work but I did twice every set which was enough.”

The best Serbian tennis player will face world no.29 Guillermo Garcia-Lopez on Thursday for a place in the quarter-finals.

The Spaniard upset no.14 seed Swiss Stanislas Wawrinka in the first round, and was better than Dutch qualifier Thiemo de Bakker in the second.