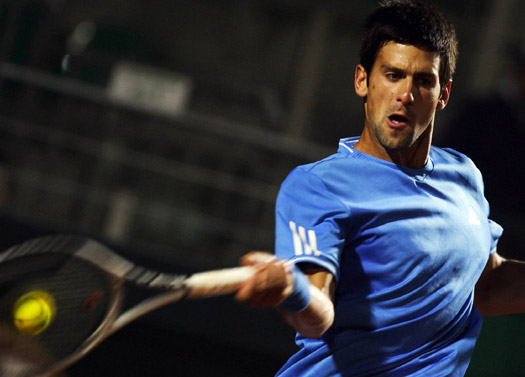 Defending champion at the ‘Internazionali BNL d’Italia’ tournament in Rome, Novak Djokovic, advanced into the quarterfinals with an easy 6-1 6-1 win over world no.17 Spaniard Tommy Robredo in only 63 minutes.

Before the third round match noone expected that Novak would clinch such an easy victory over former world no.5.

Djokovic was very confident, and Robredo was making many unforced errors, letting the Serb cruise through the sets. The 21-year old won the first 6-1.

At 3-0 for no.3 seed in the second set, Robredo broke Novak’s service to take the only game. The defending champion won all the games til the end and closed the set again with 6-1.

“I felt quite good,” the No.3 seed said straight after the match. “I had a day off yesterday (Wednesday) which helped me to recover from the late night second round and just get some more practice. I didn’t get a lot of rhythm in that first match. Today I was in the control of the match. I played quite patient, but then when I needed to step it up I did. It was quite strange because Tommy was making a lot of unforced errors, so he didn’t put a lot of pressure on me.”

“I have been playing really well in the last two or three months regardless who is in front and who is behind me,” said Djokovic when asked about the battle for second spot in the rankings between himself, Roger Federer and Andy Murray. “I just focus on my game, and I’ve been playing really well. Let’s see if I can keep it up. There is a not a lot of room for relaxation, especially if you are competing with a players like Federer, Nadal who are reaching the final stages of each event they’re playing. You have to be focused all the time and you have to perform your best and try to get in the final stages as well in order to stay in the top rankings wise, points wise. I’ve been playing at least semi-finals of each event I’ve participated in on this surface last year, so I think I’m playing better than I did last year. I’m moving much better on clay, so hopefully I can get the results out of that.”

Djokovic made 20 unforced errors, 10 less than his opponent.
He hit 14 winners to Robredo’s 5.
The Serb converted 6 of his 9 chances for break, while the Spaniard capitalised on 1 of his 4 break points.