Nole against Rafa in dream final! 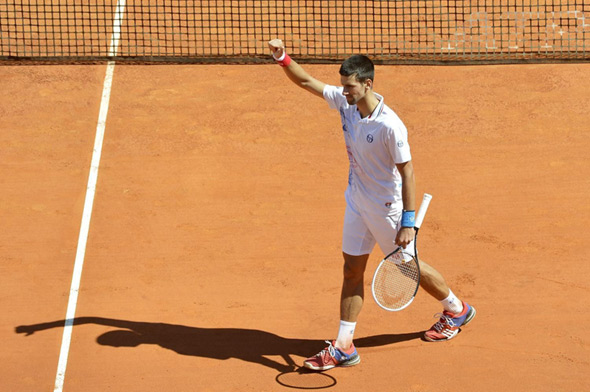 Nole is through to his third ATP final of the season!

The world no.1 defeated Czech Tomas Berdych 4-6, 6-3, 6-2 on Saturday to reach the finals of the Monte-Carlo Rolex Masters for the second time.

Djokovic broke serve 4 times and saved 8 of 10 break points he faced to claim victory in 2 hours and 42 minutes.

Novak had a 4-2 lead in the opening set, but Berdych managed to break him twice for 6-4.

The 24-year-old Belgrade native recovered quickly and took over the control of the match. He broke the Czech in the second game, consolidated the break and took the set 6-3.

Nole kept the momentum going into the deciding third set. He raced to a 4-0 lead with a double break, and comfortably served out the match 6-2 for passage to the final.

“That’s probably one of the most difficult conditions that I played in, in my career, really,” said Novak. “It was not just the strength of the wind that was blowing, it was the changing of the direction. You couldn’t really predict where the ball was going to come from. It was really tough. But in the end I managed to hold my nerves and play well in the third.”

Nole and Rafa will meet once again at the picturesque Monte Carlo Country Club on Sunday at 14.00 CET. The Spaniard eliminated no.9 seed Frenchman Gilles Simon.

Nadal leads their H2H 16-14, but Novak has won their last seven encounters, all in finals, most recently at the 2012 Australian Open.

“It will be the most difficult match for me in this tournament,” said Djokovic. “He’s the player to beat here. He’s the player to beat on clay courts. He’s the best ever in the history of the sport on this surface. It’s the ultimate challenge. I need to play well. I need to play well from the first to the last point. I cannot have ups and downs. I cannot afford that against Rafa. I’m aware of that. But why not believe that I can win?”