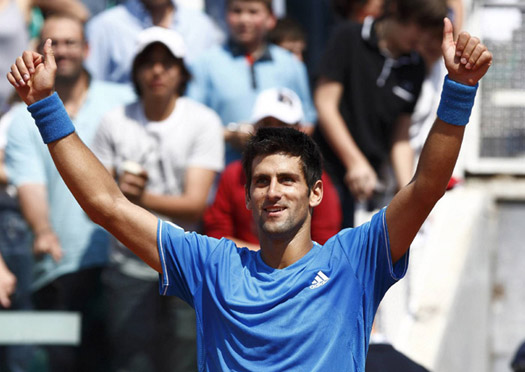 Defending champion and third-seeded Novak Djokovic fought back from a set and a break down to defeat world no.2 Swiss Roger Federer 4-6, 6-3, 6-3 in 2 hours and 9 minutes to book his place in the finals of the Internazionali BNL d’Italia for the second consecutive year.

Djokovic saved two break points in the opening game of the match. Three unforced errors from Novak and an ace from the Swiss brought a love game to Federer. Both players held their services til 4-4 when Federer used the third break point to go 5-4 up. Roger served it out for the first set and closed it 6-4.

World no.2 used a lapse in concentration from Djokovic and made a break in the opening game of the second set. Novak was down 1-2 when the match was suspended due to rain. That break helped him regain his momentum and self-confidence and he exploded in the rest of the set. From 1-3 down Nole broke Federer’s service twice to win five games in a row and take the second set 6-3.

The Swiss started the third set with a love service game. He broke Novak’s service in the fourth game to go 3-1 up, but the Serb rebroke immediately and then held to equalise to 3-3. Djokovic used his second chance for a break in the seventh game and turned around the result to 4-3. The defending champion then increased his lead to 5-3 and broke his opponent’s service once again to win the set 6-3.

Djokovic served 3 aces to Federer’s 6.
The Serb hit 31 winners to Federer’s 28, and made 39 unforced errors, 3 less than his opponent.
Nole capitalised on 5 of his 8 break points, while Roger converted 3 of his 11 chances for break.

Novak will play against world no.1 Rafael Nadal in the finals of the ATP World Tour Masters 1000 tournament in Rome (clay, 2.750.000 euros). The Spaniard beat Chilean Fernando Gonzalez 6-3 6-3.

The final match is scheduled on Sunday at 4pm.