Nole downs Federer to reach the finals in Miami! 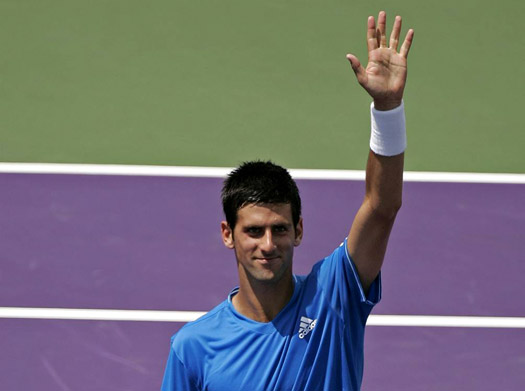 World number three Novak Djokovic rallied from a one-set deficit to defeat second-seeded Roger Federer 3-6 6-2 6-3 in 1 hour and 46 minutes for a place in the finals of the Sony Ericsson Open.

Federer broke Novak’s service in the fourth and the sixth game of the first set for 5-1 lead. Nole managed to break back once in the seventh game and then held for 5-3, but the Swiss closed the set 6-3.

Nole earned two break points in the second game of the second set and converted the first for 2-0 advantage. He faced scare in the next, but held to increase his lead to 3-0. The 21-year old was broken in the fifth game, but he broke back immediately in a long game using his fifth break chance for 4-2. Federer got broken again in the eighth game and Djokovic took the set 6-2.

The best Serbian tennis player continued in the same rhythm in the third set. He was 4-0 up with two breaks. Federer was making a lot of unforced errors. World no.2 managed to break Novak’s service in the fifth game and then held for 4-2. It looked like that might be a turnaround, but Djokovic didn’t let the match slip out of his hands and he held to love in the seventh game for 5-2. There were no breaks til the end and Nole served out the match, 6-3.

This was Novak’s third win in ten matches vs Federer.

Both Djokovic and Federer served 4 aces and made 4 double faults.
Novak hit 20 winners to Federer’s 22, and made 30 unforced errors to Roger’s 47.
The Serb capitalised on 6 of his 10 chances for break, while the Swiss converted 4 of his 6 break points.

Djokovic’s opponent in the finals of the ATP World Tour Masters 1000 tennis tournament in Miami will be Andy Murray (GBR, 4) who defeated Juan Martin Del Potro (ARG, 6) in three sets.

Nole will try to win his fifth Masters title and to repeat the success from 2007 when he lifted the trophy after defeating Guillermo Canas in the finals.