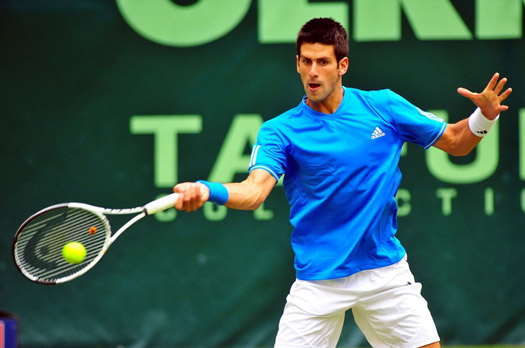 World no.4 Novak Djokovic advanced into the semifinals of the Gerry Weber Open with an easy 6:1, 6:4 win over Austrian Jurgen Melzer in 67 minutes on Friday.

Novak broke his opponent’s service twice in the first set, in the fourth and sixth game, an won it convincingly 6:1.

The Serb made a break in the third game of the second set and then held to go 3:1 up. Melzer won the next three games, breaking Nole’s service once to take a lead. Djokovic was dominating til the end of the match. He managed to break again in the ninth game and then served it out for 6:4 to set up the semifinal clash with world no.136 Olivier Rochus.

Djokovic and Rochus have met twice, the Belgian won both matches back in 2005, in Lyon and in Davis Cup tie vs Belgium.