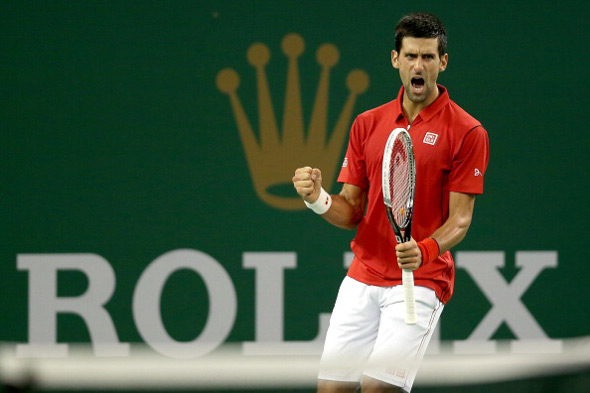 Nole is one win away from defending his Shanghai Rolex Masters title!

Novak enjoyed better start to the semi-final encounter, breaking serve in the second game and holding for 3-0 lead. Tsonga broke back in the fifth game, but the top seed converted his chances twice more for convincing 6-2.

Nole led 4-2 in the second set, but the Frenchman came back. Djokovic put the pressure on Tsonga again in the 12th game and sealed the victory with a forehand winner, improving their H2H record to 11-5.

“It’s important for me to get into another final,” Djokovic said in a post-match interview. “My serving was very controlled, very efficient… I was trying to open up the court and move him around. I know he likes to have targets, he likes to play from the backhand corners so I tried not to let him into that comfort zone.”

Novak will be playing in his seventh ATP World Tour level final this season, and his 60th overall (38-21 record), looking to win his second Masters 1000 title in 2013, following victory in April in Monte-Carlo.

Djokovic has a 9-3 ATP Head2Head record against the Tandil native. Nole prevailed in their most recent meeting, a five set thriller in the Wimbledon semi-finals this year.