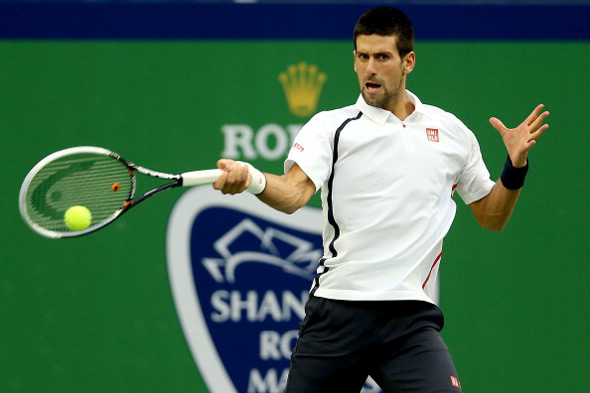 Brilliant Novak advanced to his 52nd ATP World Tour final and first at the Shanghai Rolex Masters, after he defeated world no.7 Czech Tomas Berdych 6-3, 6-4 on Saturday.

Nole needed 86 minutes to see off Berdych, and now leads their head-to-head 10-1.

The world no.2 stormed to a 5-1 lead in the opening set breaking Tomas twice. He was broken back once serving for the set, and had to save a break point in the ninth game before sealing it 6-3 in 42 minutes.

Djokovic, who won the China Open last week, made a break in the third game of the second set and consolidated it with a love service hold for 3-1. The Serbian star kept the advantage till the end and served out the set and match 6-4.

“It’s a big challenge when you play a Top 10 player,” said Novak. “Tomas is in great form the past couple of months. He’s always a difficult player to play against on any surface because he has a very powerful serve and great forehand. I played tactically right. I was putting a lot of returns into the court, putting a lot of pressure on his serve. On the other hand, I was serving well when I needed to.”

The 25-year-old Belgrade native improved to 69-11 on the season by reaching his tenth final of the year.

An impressive performance from Novak, who will look to clinch his 13th Masters trophy on Sunday when he faces no.3 seed Andy Murray of Great Britain.

Djokovic leads Murray 8-7 in their career head-to-head. Andy won the most recent encounter, the 2012 US Open final.