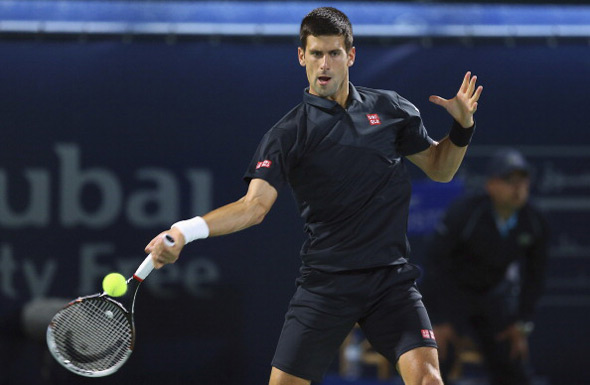 World no.2 Novak Djokovic cruised into the quarter-finals of the Dubai Duty Free Tennis Championships with a 6-1, 6-3 victory over Roberto Bautista Agut in just 57 minutes on Wednesday.

The defending champion landed 76% of his first service points and converted five of his eight break point chances, surrendering serve once when serving for the match. He wrapped up his 30th win at the Aviation Club Tennis Centre and his sixth win in 2014.

“I have done really well today from the first to the last point. There were no major ups and downs, especially with the serve that helped me to win comfortably my service games, a lot of free points,” said Novak. “He’s a quality opponent. He moves really, really fast around the court. He always gives you an extra shot to play but I made a lot of winners. I was covering the baseline really well.”

For a place in the last four at the ATP World Tour 500 event, Djokovic will play no.6 seed Mikhail Youzhny of Russia (Thursday at 16.00 CET).

“Mikhail has been around for a long time, and he has one of the nicest and most efficient one handed backhands on the tour. He’s a very talented player. He anticipates great on the court. He played semifinals of a few Grand Slams. He’s been a top 10 player. He knows how to play on a big stage,” the four-time Dubai titlist said of his next rival. “I think the last time I played against him was in quarterfinals of the US Open. I remember well that match. It was a tough one. I don’t expect anything less this time.”