Nole easily through to quarter-finals of Australian Open! 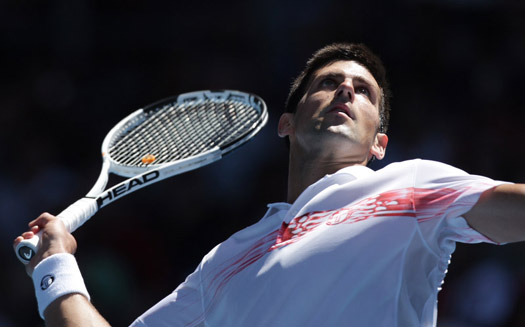 Australian Open 2008 champion Novak Djokovic has overpowered Poland’s Lucasz Kubot in straight sets 6-1 6-2 7-5 in 1 hour and 55 minutes to progress to the quarter-finals in Melbourne.

Djokovic opened their second career clash with a confident, easy hold . He grabbed his first break of the match in the fourth game. The Serb eased through a comfortable service game to consolidate the break, broke his opponent’s service once again and took the set 6-1.

Novak was racing through his service games to keep the pressure on Kubot. The 22-year-old broke his opponent’s service twice and wrapped up the second set 6-2.

Nole made a break in the fifth game of the third set, but Kubot broke straight back to level the result. The Pole handed Djokovic a break with a double fault in the eleventh game, and no.3 seed closed the set and match 7-5.

Nole converted 6 of his 9 break points, while the Pole capitalised on 1 of his 2 break point chances.

“If you look at the draw, I probably had, you know, the best possible draw at the moment. But I didn’t want to underestimate my opponent absolutely, because I’ve played him the finals of Belgrade, Serbia Open last year. I knew that he’s a tough opponent to play against. So I just went to the court willing to play my best from the start”, said Djokovic after the match.

“I think the first two sets I was very dominant on the court, then he lifted up his level of the game a little bit. That’s why we had a longer third set. In general, I was very happy with the way I performed today. I think serve was much more consistent today. And I had better serve percentage of the first serves. I got more free points there, which gave me a lot of advantage”, added Novak.

”I played Jo many, many times in the last two years. Probably the biggest match that we played was finals here two years ago. He’s improved so much, and he’s a top 10 player.”