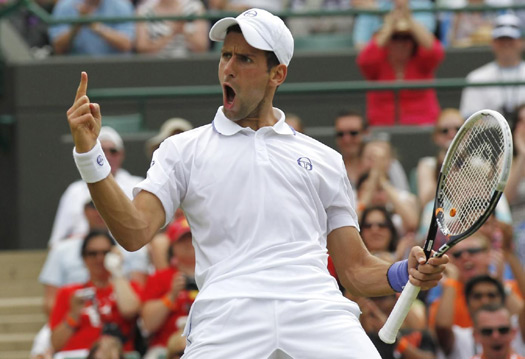 Nole is again only one win from reaching world no.1!

The Australian Open champion Novak Djokovic needed 4 sets to get past world no.158 Australian sensation and his regular practice partner Bernard Tomic on Wednesday at Wimbledon, winning their quarter-final clash 6-2, 3-6, 6-3, 7-5 in 2 hours and 41 minutes.

Djokovic earned a breakpoint in the opening game with a stunning backhand down the line, but then hit a forehand into the net for deuce. A second was saved by Tomic as he won a long rally with a sharp half volley down the line, but Nole broke the Australian’s serve with an exquisite backhand volley. The 24-year-old made another break in the seventh game and served out the set 6-2 in 34 minutes.

Tomic got himself on the board in the second set with a composed service hold. The Australian was looking incredibly focused, while Djokovic lost his momentum. He double-faulted twice in the fourth game, the second was on a break point. Tomic consolidated his break of serve superbly to hold losing just a single point for 4-1 lead. Nole faced two more break points in the sixth game. He held to stay in the set, but not for long. The 18-year-old was receiving support from his compatriots, and was growing in confidence. He won the set 6-3.

Djokovic fired two unforced errors long, and Tomic hit a brilliant forehand on the baseline to clinch the break in the first game of the third set. Tomic consolidated his break of serve with a composed hold, and Novak could not respond. The Australian was looking very good playing like he had nothing to lose. The number two seed needed to step up his level. He had two break point opportunities in the fourth game, but Tomic pulled through and held to extend his lead to 3-1. The Australian lost his serve to love in the sixth game and Novak held his serve comfortably to move in front for the first time in the set. Nole broke Tomic once again in the eighth game and took the set 6-3.

The best Serbian tennis player made an early break in the fourth set, but the young sensation fought back in the fourth game to level at 2-all. Nole converted his chance in the eleventh game and closed the set and match 7-5.

“I’m delighted to be through, it’s a great result,” said Nole after the match. “In the first set I played well but one bad service game in the second let him in and then he was the better player. I had some very difficult service games but I managed to hold on and win the match. He’s such an unpredictable player – very young and hitting a lot of winners. He did not make a lot of errors from the baseline and that made my life very difficult. I tried to change the pace but he was better at that, so it was cat and mouse. I’m just pleased to get through.”

Djokovic has twice reached the semifinals at the All England Club, in 2007 and 2010.

Second-seeded Novak will face no.12 seed Jo-Wilfried Tsonga for a place in his first Wimbledon finals.

“Tsonga’s been playing great in the grass court season so far. He played really well in Queen’s, and now he’s been winning against top players. So he’s very dangerous,” Novak said.

Their last encounter was in quarter-finals of Australian Open 2010, the Frenchman prevailed in five sets.

Tsonga has had to overcome Go Soeda, Grigor Dimitrov, Fernando Gonzalez, David Ferrer and Roger Federer to reach this stage.

“The grass court is not my favourite surface. My first two rounds were really good. After that I’ve been kind of up and down. But hopefully now it’s going to go up. I’m aware of the importance of the match,” said Nole. “I’m very close to reaching the no.1 spot but I try not to think about that too much.”

The Serbian improved his match record for the season to an impressive 46-1 mark.

Should Nole advance to the Championships final on Sunday he will become the new world no.1. He can earn the no.1 ranking also if the top-seeded Spaniard Rafael Nadal fails to defend the title.