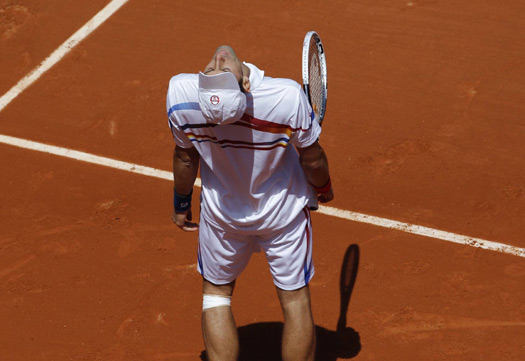 Nole will not play in the finals of the second Grand Slam of the season. The world no.2 fought hard but fell in a four-set thriller.

The Swiss ended Nole’s impressive winning streak – 43 matches won in a row overall (41 this season), dating back to the Davis Cup finals in December, which is the third-longest men’s streak in the Open era.

To win more than forty straight matches on different surfaces, in different conditions, against top players is absolutely fantastic, historic achievement. Nole went a half year without losing, clinched seven, of the 43 victories, over Nadal and Federer.

Roger was also the last man to beat Novak, six months ago at the Barclays ATP World Tour Finals in London.

Despite the loss, Djokovic completed a run that is unmatched among active players. Only Guillermo Vilas with 46 straight victories in 1977, and Ivan Lendl with 44 from 1981-82 had longer streaks.

Novak still has world’s top ranking in reach. He can claim the top if Federer beats defending champion Rafael Nadal in the French Open final.

It was the match of the championship…

Set 1 – Djokovic got things underway by serving first. Federer made a strong start to the match and earned himself three break points with a forehand winner down the line. Novak saved the first and second with huge serves but hit a forehand wide on the third to hand Federer the early break. Nole earned himself two break back points. Only the one was needed as Federer sent a forehand long. The Serb made another break in the sixth game, but Federer broke back in the seventh at the second attempt with a series of powerful forehands that eventually saw Novak send a defensive forehand long. The 24-year-old Belgrade native earned two break/set points in the tenth game, but the Swiss held to level at 5-all. The set went into a tie-breaker, Federer won it 7-5 in 70 minutes.

Set 2 – Nole failed to capitalise on his break opportunity in the opening game of the second set. He was broken in the fourth game, and had a chance to come back into the set in the ninth game, but Federer held and closed the set 6-3 in 45 minutes.

Set 3 – Novak broke Federer in the second game of the third set and held to consolidate the break. The best Serbian tennis player kept the advantage and took the set 6-3 in 37 minutes.

Set 4 – Light was already bad in Paris. Fantastic Novak made a break in the ninth game for 5-4 lead and was serving to level the match at 2 sets-all. Federer fought back to equalise to 5-5. Nole earned two more break points, but Roger came back with incredible serving. Djokovic came so close to taking one of the all-time great French Open semi-finals into a fifth set and second day, but the third-seeded Swiss made one mini-break more than Nole in tie-break to advance into the grand finals in the capital of France.

“After the first set I was going down a little bit,” Novak said. “He was taking control of the match but I managed to come back, definitely not easy against Roger. I tried to moderate myself. I think I played well. He played really well in important moments. I congratulate him. We were part of a very good match but it feels bad losing.”

“I was serving for the fourth set but he played a couple of good points and he deserved it. During the tournament you feel the energy. You need the daily routine. These were the best months of my life, an incredible period. It had to end some time. Unfortunately it came in a bad moment. What happened happened. I can’t affect it any more. A couple of points decided it. This is sport. There is nothing to be sorry about.”

“It has been incredible match tonight and even better last 5 months for me. Congratulation to Roger for playing well. Now up for some rest,” Nole wrote on his Twitter and Facebook. “Thank you all for the support. Grass court short season coming up. Looking forward to Wimbledon.”

Congratulations on amazing 2011 season so far!

The tennis stage moves from clay to grass. Djokovic will next play at the third Grand Slam of the year, Wimbledon, which will be held from June 20 until July 3.

Novak has withdrawn from the AEGON Championships at The Queen’s Club, which starts on Monday, June 6.