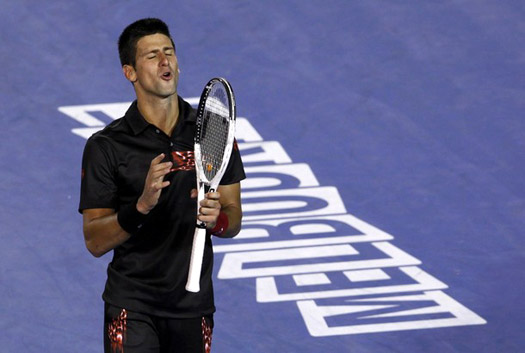 Djokovic held comfortably at the start of the opening set and made a break in the second game, but Tsonga hit straight back and consolidated the break for 2-2. The Serb broke his opponent’s service in the sixth game and then held for 5-2 lead. He was serving for the set at 5-3, but missed a set point and Tsonga broke back once again. The set was decided in a tiebreaker. Nole was leading 4-2, he had one more set point at 7-6, but no.10 seed won it 10-8 using his third chance.

The 22-year-old from Belgrade was again first to make a break the second set, but Tsonga fought back in the eighth game to level the result. The set also went to a tiebreaker. Novak was better this time and took it 7-5.

Djokovic soon found his rhythm, holding easily and pushing Tsonga’s serve in each game of the third set. He made two breaks, in the fourth and sixth game and clinched the set 6-1 in just 37 minutes.

Novak was really struggling at the beginning of the fourth set, feeling sick. Tsonga took fool advantage and capitalised with a break in the second game. Djokovic was clearly feeling unwell, and he took a medical time-out. He got broken again in the fourth game, and the Frenchman soon had a 5-0 lead. The no.3 seed looked a bit beter later in the set. He managed to break back once, but Tsonga closed the set 6-3.

Tsonga made a break in the opening game of the fifth set. He was pushed to deuce in the second game, but held and consolidated his break. Nole saved two break points in the third game and closed it out with a strong first serve, but that was the only game he won in the final set, as Tsonga broke him again in the fifth and seventh game to win the set and match 6-1.

Djokovic capitalised on 6 of his 16 chances for break, while Tsonga converted 8 of his 12 break points. The Frenchman now leads their H2H 5-2.

“It was unfortunate that I couldn’t perform on the level that I wanted to in the fourth and fifth set”, said Djokovic after the match. “I don’t want to find excuses for my loss, but I went to vomit and I had diarrhea before the match. It’s been a great tournament for me.”

Djokovic defended his last year’s points. He could become world no.2 on Monday if Murray doesn’t win the title.

Nole next plays at the ABN AMRO World Tennis Tournament in Rotterdam. The ATP World Tour 500 event starts on February 8.