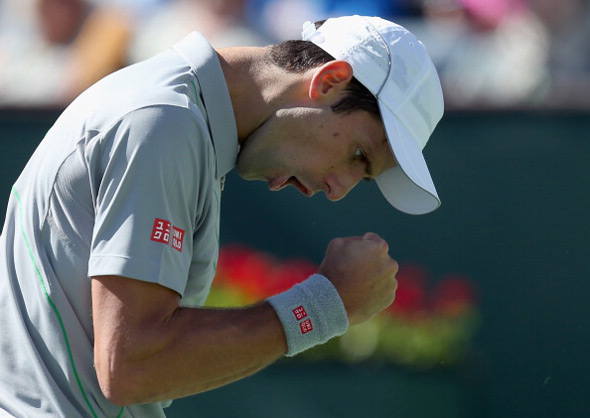 After Isner failed to capitalise on three set points in the 10th game, Novak broke him in the next and aced out first set 7-5.

The world no.2 had a golden opportunity to close the match in straight sets, but the American prevented him from serving it out at 5-4 and 6-5, and went on to win a tie-breaker 7-2, forcing a decider.

Djokovic regained control with a break in the fourth game of the third set when Isner double-faulted on break point to give him 3-1 lead. The Serb broke once again and closed it out 6-1, reaching his first final in 2014.

“I thought I returned really well, earning a bunch of opportunities on his service games,” said Nole. “Twice I had chance to finish it out, but played two bad games, and he played an incredible tiebreaker. And when you get to the tiebreaker with John Isner, whoever you are, you’re not a favourite (smiling). I just tried to hang in there, stay mentally tough when I lost the second set, and played a great third.“

Novak will face 7th-seeded Roger Federer in Sunday’s final (22.00 CET) after the 32-year-old Swiss ousted Alexandr Dolgopolov of Ukraine 6-3, 6-1 earlier in the day.

It will be their 33rd career encounter, Federer leads 17-15. The Basel native won their last meeting, the Dubai Duty Free Tennis Championships semis (3-6, 6-3, 6-2), two weeks ago.

Novak said of his opponent: “He played great in Dubai. We had a tough, interesting match in semi-finals. Whenever we play each other it’s always a huge challenge for both of us, and very few points can decide the winner. I do not expect anything less tomorrow. I just hope for myself that I will be able to perform on a high level, because I’m going to need to do that in order to get a chance to win against him.”

Djokovic is looking to add his third BNP Paribas trophy to his collection of 16 Masters titles, following triumphs in 2008 and 2011.